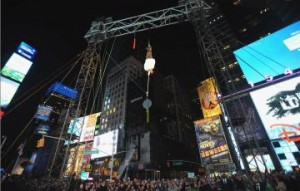 The greatest thing about being in a big city is that anything can come up and next thing you know you are attending an event without planning it. Times Square is always filled with tourists and locals going to the shows, shops or the restaurants. It is here where action happens.

Hundreds of people gathered around Times Square to see illusionist Criss Angel perform a stunt that include him being tied upside down, put into two straight jackets and 50 pounds of weight suspended from his neck with a rope. Angel explained to the audience that there had to be very little movement because it would be harder to escape the barrier.

The following link shows the entire performance. Also, check out the link to Criss Angel on his website .