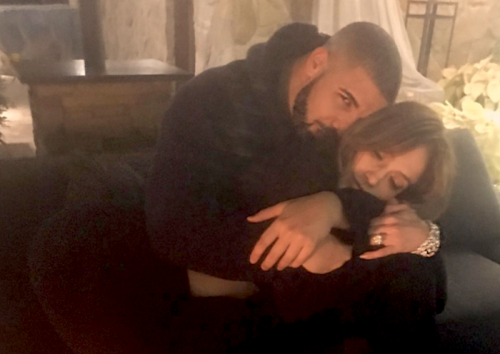 It’s official. J. Lo. has finally moved on from her backup dancing beau, Casper Smart, for the self-proclaimed “Champagne Papi” himself, Drake.

While she had us there for a moment by kissing Marc Anthony at the Latin Grammys, that seems to have just been a kiss between friends and co-parents, but of course, his soon-to-be ex-wife Shannon De Lima didn’t think so.

Anthony might not be the only one sad to see Drake and “Jenny from the Bronx” attached at the hip. After the news broke of the musical collaboration-turned-romance, international pop star, Rihanna quickly unfollowed Lopez on the social media platform.

Earlier in the year Drake presented Rihanna the VMA Vanguard Award and declared his love for her.

Rihanna was one of Lopez’s closest friends in the music industry. Eight months ago, RiRi even gifted Lopez with a pair of navy Manolo Blahnik, shoes that can cost anywhere from $500 to $900.

Rumors about Drake and Jennifer Lopez dating initially started flying when he attended her Las Vegas Residency twice two weeks ago, but things have certainly steamed up between the two since then.

Look who rolled up to my show tonight to say hi!! @champagnepapi #lovehim #jlovegas #ALLIHAVE

Do you think that after J.Lo. gives Drake “all her love” that their relationship will last?

#FourthHarmony Contract Up in the Air with Camila Exit
Grey’s Anatomy Star Possibly Returning to Hit Show
Translate »
%d bloggers like this: