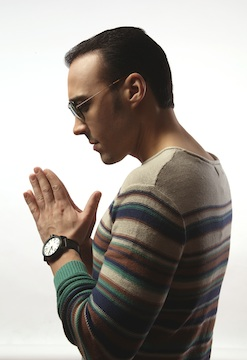 J’Martin is an example of what an artist can accomplish with the right mindset. Two years ago he was a solid artist among other solid artists. But with superior management and a reshuffling of outlook, J’Martin has moved into the upper echelon. He is enjoying a number one single “Yo Soy el Loco Aquel “ and has shared the stage recently with Gilberto Santa Rosa in big showcase events. His new album is here and like the title “Mi Tiempo” its a good place for this talented showman.

J’Martin definitely dresses the part. Always exquisitely presentable at all functions and shows. He enjoys the fashion aspect of the business and equates music together with it as an expression of great art.

“I have a secret weapon called Ariel Gonzalez, who is my stylist.”

“We get together and check fashion magazines, websites, designer clothes. He understands me and is able to bring out the best in me dresswise.”

But dressing is only as effective as the man and the talent plus the work one puts into it. For example, J’Martin balanced his professional and personal life well, as well as showing great patience in making his album choices. He picked an astonishing 24 songs from as many as 350, 12 of which made up “Mi Tiempo.” ”

It was coordinated properly and had the best producers in the Bachata genre such as Pedro “SP” Polanco, Robinson Hernandez, and Steven Cruz.”

“There is going to be a second album coming with the others, mainly duets.”

His third single from the album “Yo Soy el Loco Aquel.” A song that was presented by a Colombian songwriter (Diego Javier Gonzalez) who he found common ground. But it was producers Porfirio Pena and Pavel DeJesus who made a suggestion that gave it that extra something. His trust was rewarded in full.

“They felt it should have Tango for the dramatic effect and reached out to Hector del Curto.

We have had much success with this single along with “Cada Vez Que Te Vas” and “Ni Una Lagrima Mas.”

Inspired by his mother who through family reunions instilled an appreciation for different genres of music. What stood out for him from those family days he states plainly,

“I have been a lover of Tipico, Merengue, and Bachata all my life. It’s what my parents played and what I geard and danced to growing up both in Santiago and New York.”

J’Martin armed with a diversified music past and along with his passion has sustained the desire. He explained what motivates him on a daily basis to be his best.

“The same spirit and invisible force that has done the job for my businesses,”

“It’s something indescribable, that voice and heartbeat that tells you to keep going.”

Many see only the end product and rarely the reasons for an artist’ rise to the top levels. In J’Martin case his manager is a crucial reason.

“Hard work, an experienced manager who has helped me understand my vision, helping lead me to the light at the end of the tunnel by making me understand the most important piece in the music business are great songs, perserverance, and hard work.”

But public perception may be the most misunderstood when it comes to music artists. Often they see the glory and never the grime. J’Martin shared the apprehensions and items most don’t see behind the curtain.

“The public has this view that most of the time is from red carpets which is what is covered in papers or blogs.”

“The hard work that we have to go through from label rejections or people who don’t believe in your art. The fear of putting all the effort in recording a song and not being accepted by the audiences.”

But at the end of the day the thing that is most rewarding for an artist like J’Martin is quite simple really.

“When I hear the applauses or a simple thank you from someone who says that song changed his or her life, that keeps me going.”

This past December in a concert in the Dominican Republic called “La Gira de la Gobernaciones para el Pueblo” was a case in point where artists were able to perform in smaller towns that don’t have the finances to see stars perform live like Arenoso that stuck in the memory of J’Martin. “The respect, humility, and love that was received reassured me that this has been the right path all along.”