Joblessness Among Young Veterans Rises Above 13 Percent in December 2011

Joblessness Among Young Veterans Rises Above 13 Percent in December 2011 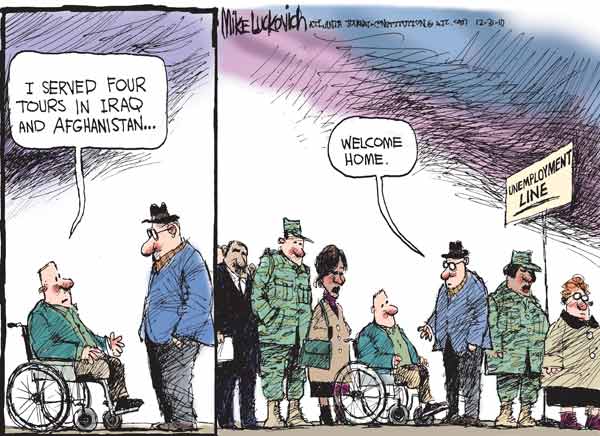 “Those who made the decision to serve our nation and to defend the freedoms of all Americans are selfless individuals who, along with their families, have made sacrifices for a cause greater than themselves. The fact that unemployment is disproportionately high for young veterans should be a cause of concern for every American,” said Paul T. Conway, president of Generation Opportunity, former Chief of Staff of the U.S. Department of Labor, and former Chief of Staff of the U.S. Office of Personnel Management (OPM). “When young veterans – highly trained and tested professionals with a proven ability to learn quickly, operate on a team, and produce results – are unable to find real opportunities in the job market, it speaks to the poor state of our economy. The root of the problem clearly does not rest with the American veteran – the issue is the faltering economy and leadership in Washington that is committed to higher regulations and job killing taxes that inhibit ingenuity and business expansion, limiting opportunities for all Americans.”

Generation Opportunity, which has more than two million Facebook fans, is proud to have former and current members of the U.S. Military as fans on its popular Facebook pages “Being American” and “The Constitution.” Currently, the organization has thousands of fans serving the nation and defending freedom in Germany, Japan, South Korea, Kuwait, Qatar, Afghanistan, and other posts around the globe.

Generation Opportunity commissioned a poll with the polling company, inc./WomanTrend (April 16 – 22, 2011, +/- 4% margin of error) and select highlighted results for all young Americans ages 18-29 appear below:

Greatest threats to national security: National Debt (62%), Energy Dependency (61%) and Indebtedness to Foreign Powers (50%).
80% view China as a danger: economic threat (48%), both economic and military threat (28%) and military alone (4%).
70% (net) would increase production of domestic energy sources like oil, natural gas, and coal, while only 22% (net) would decrease production.

Dissatisfaction with Current Level of Employment and President Obama’s Handling of Unemployment:

43% are not satisfied with their current level of employment.
Just 31% of 18 – 29 year olds approve of the President Obama’s handling of youth unemployment.

77% of young people ages 18-29 either have or will delay a major life change or purchase due to economic factors:
44% delay buying a home;
28% delay saving for retirement;
27% delay paying off student loans or other debt;
27% delay going back to school/getting more education or training;
26% delay changing jobs/cities;
23% delay starting a family;
18% delay getting married.

Head Latina In Charge: Kim Osorio [ @KimOsorio1 ] Returns to The Source [ @TheSource ] Throne
YOUNG VOICES: One Nation…Under Who?
Translate »
%d bloggers like this: