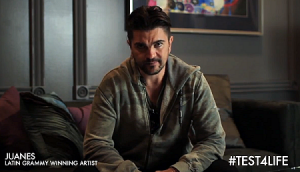 According to a recent report from The Center for Disease Control and Prevention (CDC), people ages 13 to 24 make up more than a quarter of new HIV infections in the U.S. each year. Every month, 1,000 young Americans become infected with HIV, and over half of those youth infected are unaware that they are HIV-positive.

In an effort to raise awareness for National HIV Testing Day on June 27, People en Español.com just premiered Juanes‘ PSA encouraging people to get tested as part of a campaign spearheaded by Lifebeat in partnership with The CDC and MTV’s GYT Now.

The PSA series, set to begin airing this month, will be carried by Sirius, Viacom, and hundreds of affiliate radio stations in the US and Puerto Rico, including Univision, and more.