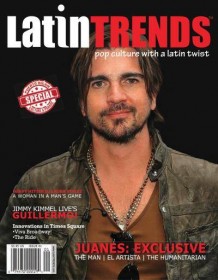 It’s 8am in the Bronx. The heavy sky above threatens to decimate, spreading its greyness at any moment. At the entrance of Lehman College, a guard playfully pretends not to know HE is coming today. That today, HE is performing. We both smile. The security guard provides directions to the performance theater. Along the way there are no posters announcing HIS arrival. None. But we all know. Juanes is coming. Juanes, the mythical figure in a leather jacket and shiny rock-star hair. Juanes, the enigmatic idol followed by millions on web and millions more who sing along to that infamous sartorial expression of love lost…tengo, tengo la camisa negra.

On Tuesday, May 15, LatinTRENDS caught up with Juanes at the Latin GRAMMY® In the Schools performance event, hosted at Lehman College and moderated by MTV Tr3s vice-president José Tillán. The Colombian singer/songwriter, Juanes, participated in an intimate Q&A and performance for the students of the Celia Cruz Bronx High School of Music. For these students, a cohort comprised of mainly Latinos, Juanes served as an agent of inspiration, speaking deeply about his painful past, emotional connection to his music, and even providing a small glimpse into the rock star’s life as a kid in Colombia.

During the “musical origins” segment of the Q&A, Juanes rearranges his posture and describes the complex relationship between the Colombian folk music of his family roots, the rock music of his teenage-escapism and a synthesis of the two that seemed natural to a musical innovator like Juanes-but unheard of in the world of Latin music ten years ago.

Juanes shares with the Bronx students, a vivid image of himself at six or seven-years old surrounded by his family-all musically inclined and talented-teaching young Juan Esteban how to play the guitar and sing. With a far-off look, he is transported back to Colombia, where a small and curious Juanes watches his father and six brothers strum guitars to folk music, while he learns to play solely by ear. His dedication to the art form of music developed right then as a child, practicing the same song over and over again alone in the living room long after all his family had gone to bed.

The artist playfully admits to writing his first song at age 9. “It was a love song,” he says, and the entire room erupts in laughter. But it was not a romantic heartbreak that drove young Juanes to turn to music for comfort during his teenage years. A solemnity as gray as the skies outside the theatre sweep over the singer’s face and settle between his furrowed brow. He shares just a touch of the social entropy that was the city of his childhood. “I was living in Medellín at that time, back in the ’80s. It was one of the most complicated times with all the narcos and mafias fighting with the police and the military. It was like a chaos. And through music, we just found a way to escape. We found a way to express our feelings, our fears, our happiness, everything-through the music. Through his metal sound.” This sound-heavy metal-expressed only through its rhythm (for young Juanes had no idea what the lyrics meant) embodied the complex feelings he had harbored after losing his father to cancer and a cousin to the violent terrorists of Medellín.

Ekhymosis-the rock band formed by Juanes and his friends when he was just sixteen-years old, dared to write lyrics condemning the violence and injustice of the city in which they lived. The group went on to gain popularity within the country, recording five albums and forming the fan base that would later show out to support Juanes‘ solo career in full force.

And what a career it has been! Juanes separated with the rock band, Ekhymosis, taking his estilo único to wider audiences…millions of them. Mixing the folk music and romantic melodies of his childhood (Carlos Gardel among his favorites) with the metal sound of American rock may have seemed like a gamble back in 2000, but Juanes followed with his heart. Twelve years, millions of albums sold worldwide and countless Latin GRAMMY®’s later, we are all following him on Twitter daily-fanáticos fieles.

Asked by José Tillán if he had ever been afraid of performing on stage or if he was a natural, the singer sheepishly responds, “I still afraid” (in a most lovable yet choppy accent). After performing at stadiums and award shows, filling enormous concert venues and selling out in countries as unexpected as Germany, Juanes admits that he is happy to begin touring for his soon-to-be released “Juanes: MTV Unplugged” album, produced by Dominican musical legend, Juan Luis Guerra and due out May 29th. The opportunity to be physically closer to his audience and play at intimate venues is something near to Juanes‘ heart and a major attraction for his tour. Explicitly requesting Juan Luis Guerra to produce the album, Juanes tells LatinTRENDS exclusively, “Well his contribution was huge. For me it was the most wonderful experience. It was a wonderful lesson of life and a lesson of music. I had a really good time learning [something new] every day. And he just took my music to a whole other level.”

“La Señal”, the first single off the album, “is about love,” says the singer. While love remains a central theme in his repertoire, Juanes is also a humanitarian (a different sort of love), establishing his own foundation, Mi Sangre, which is devoted to helping the victims of anti-personnel landmines (used for the purpose of seriously injuring and maiming humans). He is also co-founder of the Paz sin Fronteras organization and is a Goodwill Ambassador.

Yet on this same morning, at 11:15am, perhaps even as Juanes speaks candidly to the students of the Bronx high school he hoped to inspire, a car bomb goes off and Fernando Lodoño is injured during the terrorist attack, and two of his bodyguards are killed in a manner too gruesome to detail. Lodoño blames the rebel group, FARC, (Colombian Revolutionary Armed Forces) as the culpable party-a faction said to be devoted to overthrowing the Colombian government and known for demonstrations of violence (in the form of car bombs) in the past. The entirety of the story-its nefarious characters, South American setting, plots of corruption-is not the making of espionage or political thrillers. This is a reality for Colombians living in cities with homicide rates that top international charts. This menacing reality is what the humanitarian in Juanes works diligently to denounce. Through his spellbinding music, loyal to its Colombian folk roots yet experimental and evolving; Juanes intertwines the harsh truths of a beautiful country still contorting in the pain of its violent history. When asked about the objective of his masterfully created lyrics and sound, spanning a decade-long career, the singer frowns and simply says that for his fans “yo solo quería sanar las heridas.”