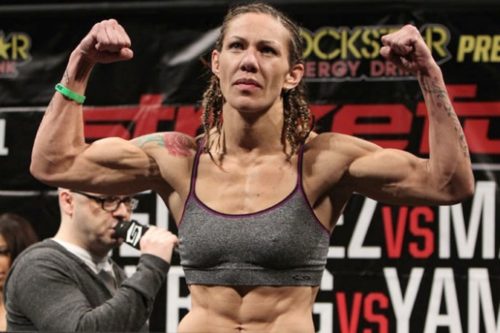 Cristiane Justino former MMA Womans Champion (formerly Cristiane Santos), used to sit at the top the totem pole of women’s mixed martial arts but has been knocked down after testing positive for steroid use in Decmeber of 2011.

“Cyborg” the ultimate woman fighting machine was undefeated for almost 5 years beating her opponents ruthlessly. She is known as the scariest woman in the world, due in no small part to her ability to kick ass.

She would destroy any woman who stepped in the cage with her. But her life as the ultimate fighter took an unexpected turn testing positive for steroids after her win against Hiroko Yamanaka at Strikeforce in 2011, when the news hit her fight was over turned.

During her scandal she separated from her husband of six year Evangelista Santos, also known as the male “Cyborg.” He is also a MMA fighter, they were married from 2005 to 2011.

During an interview with “Inside MMA” she said that she had no knowledge of what was in her supplements.

She sat down with a translator and he said “The product she took was simply to lose weight. She had no idea there was any steroids in it.

Her main problem was losing weight, so she did take something to lose weight. She had no idea what was in it. She would never put her career to risk.

A person she knew, in Brazil, for a long time, in the camp she was training, offered it to her to lose weight, and that’s how she accepted it, and how she found out what happened.

“He also said “It was a mistake that she made. She totally trusted this person, and this person probably didn’t even know what was in that medicine, as well. So, she was totally innocent of what was taking place.

She thought she was taking something just to lose weight.” She is very sad for what took place but she is training very hard hoping to get back on track and continue her career. But only time will tell on what her outcome will be in MMA.

Engagement
Cris Cyborg is engaged to ‘Magical’ Ray Elbe. Ray Elbe is a former professional mixed martial artist and holds a professional MMA record of 23-11. They announced their engagement in 2017.

Elbe competed in the welterweight division in many organizations throughout his career. He has a black belt in Brazilian jiu-jitsu and is currently a coach.

Cris Cyborg, who had long been the most dominant female fighter in the sport’s history, winning 20 straight bouts prior to facing Nunes (17 of them by way of knockout).

But there was another wrecking machine creating havoc, her name; Amanda Nunes and she was taking out the likes of Holly Holm, Ronda Rousey and Valentina Shevchenko, just to name a few, so of course Amanda and Cyborg had to fight to determine who is the UFC’s female G.O.A.T. they finally met at UFC 232 in Dec. 2018.

From the start, the action was hot and heavy, with the two exchanging haymakers right from the opening bell.

After getting hit by a couple solid strikes, Cyborg went into attack mode. Forcing Nunes to back up to the cage. But that didn’t stop Nunes from popping shots into Cyborgs face and landing a huge right hand that dropped her.

After getting right back up, Cyborg once again found herself on the end of Nunes’ strikes, this time dropping her with a huge overhand right.

Again, Cyborg got back to her feet only to get dropped again a few seconds later. After getting back up, yet again, Cyborg was the recipient of one final overhand right that put her out for the count.

And just like that, Nunes claimed the women’s Featherweight title, becoming the UFC’s first-ever female double champ in the process.

The MMA legend, who has won 20 fights by knockout in her MMA career,  performed well in her boxing debut, but was unable to find the finish off her game opponent Simone Silva. Cyborg will continue her quest in boxing and MMA

LT StaffDecember 3, 2022
Read More
Scroll for more
Tap
What You didn’t Know About Tokischa
Lupita Nyong’o on Speaking Spanish in Wakanda Forever & her Mexican Heritage
Translate »
%d bloggers like this: