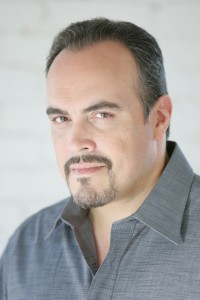 David Zayas can currently be seen starring as “Angel Batista” on Dexter, the hit Showtime drama and 2011 Golden Globes nominee for Best Television Series – Drama. A former New York City police officer, Zayas began his acting career when he joined the Labyrinth Theater Company. Since then, Zayas has starred in more than 30 plays, including Jesus Hopped The A Train, In Arabia We’d All Be Kings and Our Lady Of 121st St. While performing in New York plays, he began to book roles on hit TV shows such as New York Undercover, Law & Order and NYPD Blue, all while working for the New York Police Department. Zayas’ success earned him a leading role on UPN’s crime drama The Beat. Soon after, Tom Fontana (writer of The Beat) created the character of “Enrique Morales,” the fierce leader of the Latino prisoners on HBO’s Oz, especially for Zayas.

His feature film credits include Bringing Out the Dead, The Yards, Undefeated, Wit, Angel and The Interpreter. He also recently starred in the feature film Michael Clayton opposite George Clooney, and The Savages with Philip Seymour Hoffman. Zayas was also seen in Sixteen Blocks opposite Bruce Willis, and in the ABC mini-series The Path To 9/11. Zayas has also starred on Broadway in the Pulitzer Prize-winning Anna in the Tropics.
Zayas was most recently seen on the big screen, starring in the sci-fi thriller Skyline. He also recently starred in The Expendables, portraying the villainous “General Garza” alongside Hollywood heavy hitters, including Sylvester Stallone, Arnold Schwarzenegger, and Mickey Rourke. He will next be seen in 13, where he’ll star alongside Jason Statham, Mickey Rourke, and 50 Cent.

My teacher, Ms. Fitzgerald, at Stevenson High School in the Bronx pulled me to the side and told me I had something special and that I would excel if I pursued it. I was very quiet and shy. However, after a writing exercise she had assigned us, she shared a scene I had written with the class. I will always remember her encouragement planted in my soul.

2. Define your experience growing up?

I grew up in the Bronx. I was not very sociable except for sports. I had great parents and few friends. I escaped by attending a movie theater, where I stayed for hours. I was an average student but always a dreamer. I was always curious about life. I was lucky and smart enough to avoid the local traps like drugs and gangs.

3.Tell us some of the challenges you’ve had to overcome.

Tough question. I would say when I was police officer and trying to break into acting. It was tough to break through the stereotype of someone who was dabbling in acting. I wasn’t taken seriously by the business, so getting an audition required a lot of work. I committed fully with acting classes, theater, and involvement in the acting community. But even today, it’s still an issue I have to address.

4. What would you say was the greatest positive influence on your career?

My father’s focus, work ethic, sense of responsibility and integrity was in the forefront of my life. He was a model for me in how to conduct myself in many different situations. Though he had no interaction with my acting, my choices and how I conduct myself in show business, it always seems to go back to what I learned from him.

5. As an honoree, what do you hope that being a trendsetter will inspire you to accomplish?

It’s always a humbling experience when you are recognized with an award. It inspires me to be more generous in all aspects of my life.