Mexicans Choosing Canada over US to Spend Their Vacation & Their Money

Mexicans Choosing Canada over US to Spend Their Vacation & Their Money 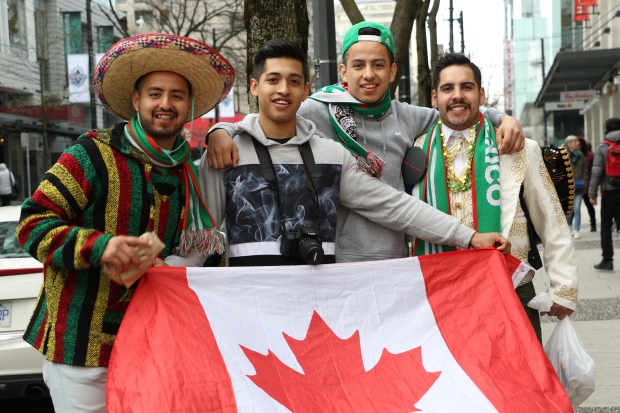 President Donald Trump loomed large in the mind of Mexico City plastic surgeon Rodrigo Munoz as he was deciding where to go for a winter ski vacation.

Munoz has skied in Nevada and New Mexico, but what he and many others perceive as Trump’s hostile posture toward Mexico made him seek out a more hospitable climate to spend his time and money. He went to the Canadian Rockies instead.

I don’t want to go to a country that does not accept the people from my country,” Munoz said after his recent return from a weeklong trip.

According to Forbes, Mexico is America’s second-largest inbound tourism market, accounting for some 18.4 million visits in 2015. Just this year, experts predict 7% less visits from Mexico, totaling a $1.6 billion loss in direct economic spending by 2018, according to Tourism Economics, a research firm.

Many of his fellow Mexicans share this view. Canada has seen a surge of visitors from Mexico since December, when it lifted a visa requirement that had been imposed in 2009. The change was planned before the U.S. election, but it is widely viewed as a reflection of warmer relations between Canada and Mexico. Trump, meanwhile, is pushing for a wall along the U.S. border with Mexico, has stepped up immigration enforcement and wants to re-negotiate the North America Free Trade Agreement, the 1994 treaty that created a closer trading relationship among the three countries of North America.

Trump’s rhetoric has turned off Mexicans, at least among the more affluent who travel overseas for pleasure, business and education.

“Right now, my mind really is not as geared toward traveling to the United States,” said Gabriel Leal, a public relations professional in Mexico City. “Many friends lately have been making the decision to cancel trips to the United States and go to Whistler,” the Canadian ski resort that he said “more and more is becoming a popular destination” for Mexicans.

The number of visitors to Canada from Mexico increased nearly 70 percent in December, to 30,268 from 18,095 in the same month a year earlier, when the visa requirement was still in place, according to government figures. Visits by Mexicans to Whistler are up 25 percent and are expected to be higher during the spring high season, said Shawn Lang of Tourism Whistler.

The Mexican government had been promoting the idea of closer relations with Canada before the U.S. election when Trump was gaining strength as a candidate.

Mexico’s ambassador to Canada, Agustin Garcia-Lopez Loaeza, said relations with Canada are better than ever. He told The Associated Press that Mexicans felt “betrayed” when the Conservative Party government of Prime Minister Stephen Harper imposed the visa requirement in 2009 because of a sharp rise in Mexicans seeking asylum in Canada.

The current Liberal Party government of Prime Minister Justin Trudeau sought to remove the major irritant in relations, increase tourism and get Mexico to agree to open its markets to Canadian beef. So far, there has been no sign of a flood of refugees returning, with only 81 Mexicans applying in December.

Neither has there been any sign of Mexicans in any significant numbers using Canada as a route into the United States, said David Long, a spokesman for U.S. Customs and Border Protection in Buffalo, New York. The agency apprehended 1,169 Mexican citizens along the northern border in 2016 but most were believed to live in the region.

Canada has immigration policies similar to those of the U.S. and people who don’t qualify for legal residency can face legal trouble just as they would in the United States.

Nora Trueba and her husband, Israel Ochoa, both Mexican citizens, came to Canada for their honeymoon 11 years ago and decided to stay, eventually having three children in Toronto. But he was caught and ordered deported. She hasn’t received a deportation order so far, and the couple has appealed his deportation on humanitarian grounds on behalf of the kids, who are Canadian. A final decision is expected later this month. Trueba said she and the kids will go if her husband is sent back to Mexico.

But others who have managed to stay or are just visitors said they have found a friendly atmosphere.

“I can freely say that I am from Mexico and people are welcoming and people here say great things about my culture and my country,” said Pepe Barajas, who immigrated from Mexico eight years ago and owns restaurants and a cleaning service in Whistler. “I wouldn’t be able to say that in the United States. They look down at you and you don’t feel welcome.”