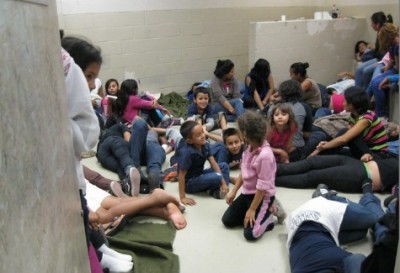 Two weeks ago, the Californian town named Murrieta gained national attention in America after its residents showed how intense the immigration debate is getting in this country. When buses containing immigrant detainees were scheduled to drop them off at a local holding facility, the townspeople protested and blocked them.

According to the town’s mayor the imposition of the immigrant detainees in their town was a burden they did not want since they believed most of the immigrants upon the bus were probably criminals. However, on those buses that met the screaming blockade of “Immigrants go home!” were families and children immigrants who were arrested trying to escape their dangerous lives back in Latin America.

According to reports, the number of children immigrants making the long journey into the country is on an increasing rise. And for most who make it they are met by, or go to, border patrol and are detained like common criminals.

To help children immigrant detainees a new partnership was launched last Tuesday, the Border Kids’ Relief Project is a joint venture that seeks to support and aide groups of children who are currently going through immigration proceedings.

“What we have here is a humanitarian crisis. We are talking about children who need our protection, our assistance, our love,” said civil rights leader Dolores Huerta of the Dolores Huerta Foundation, is one of the participants of and leads the partnership.

Currently, children immigrants who are held within detention centers across the country cannot be helped by organizations or volunteers because they are prohibited from providing support to unaccompanied minors. However, the project seeks to help children who are in the midst of immigration proceedings and hope to relocation them to various parts of the country where they may have family.

Together the new relief project aims to organize donation drives throughout the country to help the children at the center of the ongoing immigration crisis. In-addition, the project plans on leading online and social media outreach to gain support from others who want to help and arranged a volunteer trip to the Rio Grande Valley—one of the largest areas where detainees are located—to serve detainees at the Food Bank.

“Regardless of the politics surrounding this issue, the fact of the matter is that the children and families going through this situation are suffering,” said Elianne Ramos of Speak Hispanic.

For more information on this new project and how you may help visit BorderKidsRelief.org.

In Bolivia, Kids Are Having to Work As Young As Age 10
New Jersey Latino fights to keep Immigrants from deporting
Translate »
%d bloggers like this: