NFLEROS: A FOOTBALL SHOW FOR LATINOS

NFLEROS: A FOOTBALL SHOW FOR LATINOS 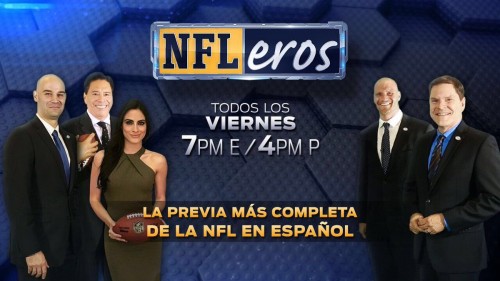 Fox Deportes is launching a new NFL-themed show weekly for the Latino viewer. Every Friday at 7pm ET, this show, called NFLEROS will provide various components that will include the usual headlines, highights, and game previews.

But what sets this show apart will be starpower names and original programming. Start at the top with host Pablo Alsina who is joined by former Super Bowl winning linebacker Brady Poppinga, who played for the Green Bay Packers. To round out the team we have NFL reporter Valeria Marin and veteran Fox Deportes broadcaster John Laguna, and Emmy-Award winning broadcaster Jessi Losada.

“We are pleased to expand our NFL coverage with NFLEROS and provide viewers with new content and insights from a panel of experts with unparalleled experience,”

After the historical first Spanish-Language broadcast of a Super Bowl, Fox Deportes wanted to expand on the menu they provide. For example segments such as “NFLEROS Opinan” will provide a platform for influental persons to share their points of view concerning teams, players, and coaches. There is also “Thursday Night Game Analysis” where Losada, Poppinga, Alsina, and Laguna discuss and debate plays. A tribute to Hispanic athletes will also be an interesting aspect to this show. With more contributors to come, NFLEROS will be the place to go for the Latino fan of Football, the one thats played with helmut and pads.