Originally published in the  November 2016 issue of LatinTRENDS Magazine

The Bridge to Nuyorican Spoken Word

Before each performance, 22-year-old Noel Quiñones has one ritual. He kisses one of the two necklaces he wears: the Taino sun and coqui necklace, representing the Tainos, the indigenous people of Puerto Rico; or a gold cross, passed down from his great grandmother just before she passed away. Quiñones carries the history of his people on his neck, and his art is the way he lives out that history in the present-day.

For the past seven years, Quiñones has been honing his craft as a spoken word artist. Quiñones’ journey began in the small town of Mercersburg, Pennsylvania. He was taking a creative writing class at a two-week summer program when his teacher gave him an assignment.

“My teacher told me to write one poem every day of the two weeks we were at camp,” said Quiñones. “I filled the book up by that May. It’s interesting because my first encounter with poetry was not through [someone else’s] work, but through an exploration of my own feelings and experiences.”

The exploration went through different phases. Quiñones looks at his sophomore year through senior year at Fieldston School as his hobby phase. He’ll go back and look at his early work, but it was during his freshmen year at Swarthmore College – with a poem called “Vitamin C” – that the poet in him flourished.

In his sophomore year, he and the Swarthmore College slam team participated in the 2013 College Unions Poetry Slam Invitational (CUPSI) at Barnard College. It was a double homecoming for the New Yorker. He performed in front of a hometown audience, but it was his poem “El Cantante,” where he took on the persona of Puerto Rican salsa singer Hector Lavoe, what caused a vivid awakening in the artist. “I started to find my place,” said Quiñones.

Then came, as he describes it, the key in the ignition: “For Tato Laviera (Bomba),” an ode to the Nuyorican poet. Earlier in the piece, Quiñones says, “Einstein, el campesino, compacted the flavor. Now I am the bomb, the gift, a favor.”

The piece, performed at the 2015 CUPSI at the University of Richmond, validated his place. “I am continuing the Nuyorican history. The Nuyorican poet is responsible for creating newness,” he says, referencing the foreword by Miguel Algarin in the collection “Nuyorican Poetry: An Anthology of Puerto Rican Words and Feelings.” Algarin co-founded the Nuyorican Poets Cafe in the Alphabet City section of Manhattan. “The newness needs words, words never heard before or used before. He has to invent a new language, a new tradition of communication.” 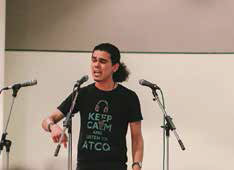 That was “Bomba.” “It was taking the Nuyorican concept and putting my own spin to it,” said Quiñones. It was an affirmation not only to his art, but also to his identity. As many young Latinos, the validity of their Latinidad is questioned, but Quiñones learned through his art that Latinidad is just subjective. “I was walking around Philly and saw a t-shirt that said “History + Community = Pride,” and I had a spiritual moment, which sounds stupid because it’s a shirt,” Quiñones said with a chuckle.

Quiñones creates newness within this identity. “I don’t call myself Puerto Rican because that was the name given to my island by Spain, meaning Rich Port.” Quiñones identifies as an AfroBoricua. “Boriken is the original name of my island, meaning land of the valiant lords, and so people of Boriken are called Boriquens or Boricuas. I say Afro because I find it necessary to acknowledge my connection to Africa and not diminish or demonize it.”

Spoken word is no easy art. Quiñones blows into a napkin and lets out a couple coughs, still recovering from his engagement at Friends Seminary School on Wednesday. He’s also in the middle of his first official tour with Piel Cafe, a two-man poetry collective comprised of him and CUPSI teammate Julian Randall. Quiñones scoffs at the question of burning out. “I got my ancestors behind me,” he says, his voice more heightened than before, as if he’s jumped into the middle of his performance. “And I’m not going to stop.”