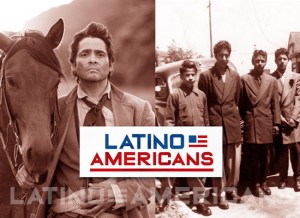 Call it perfect timing that PBS has aired a serial documentary highlighting the history of Latinos in America. The six one-hour long documentary entitled Latino Americans began at the end of September and continues into the beginning of October around the annual National Hispanic American Heritage Month.

The documentary starts at the very beginning concerning how influential the Latin world was on the country. Beginning during the early era of colonization with the claiming of thirteen colonies, areas mostly in California and the American Southwest was noted as being the very first colonies in the United States to have spoken Spanish. The language was due to the Spanish settlers first ruled the territories listed above before the rule was taken over by Mexican authority pre-19th century.

From the early days of colonization to the gold rush that gripped most of California and Mexico, the documentary moved into the early 20th century. The documentary gave attention to the Pachuco and Zoot Suit riots in Los Angeles in 1943.

The incident was between Mexican and Latino youths and Marines who were stationed in the area. The documentary noted that the incident was in response to Latino youth no longer being able to accept the racial treatment by sailors who targeted them by their particular fashion sense of Latino youth wearing the pin-striped suits.

The documentary also acknowledges the Chicano Movement. The movement began in the 1960s and was quite similar to the Civil Rights Movement but focused on empowering the Mexican American by giving them a voice in the country.

The documentary described how the movement began when an ex-service man known as Cesar Chavez, the well-known Chicano activist, who was sitting in a Whites Only section of the movie theatre within a small Texan town and was arrested. The next night, in an act of protest many Mexican Americans sat in the same section. Chavez became the face of the movement like Martin Luther King became of the African American Civil Rights Movement.

The overall purpose of the documentary series was to show the historical events of the Latino American community in the United States of America. From the early days of colonialism, to immigration, and the growth of Latino independence in the country the series is not merely to be shared with Latino Americans of the now and the tomorrow but for all to see the endurance of human beings and Americans.

What does the Shutdown of our Government mean?
Congressmen Charles Rangel Arrested in Washington, D.C
Translate »
%d bloggers like this: