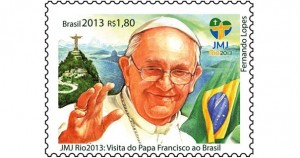 To outsiders World Youth Day has been viewed as a rock festival of sorts for Catholics of the Christian faith. Organized by the Catholic Church and started back in the 80s under Pope John Paul II the event is an annual youth were bishops and their dioceses from all over the world gather at selected countries every two to three years. According to the current Pope, Pope Francis, he cannot express how much praise and thanks he has for the country hosting the event.

This year WYD was held in Brazil and drew in millions of people who participated in the event which is the first abroad trip for Pope Francis who became pope back in March.

During the traditional Angelus Sunday Blessing, Francis expressed his gratitude for the Brazilian people calling them “good people…with a huge heart,” and that he “won’t forget the warm welcome,” he felt while there.

At Sunday’s blessing, Francis disclosed to those gather that the youth who joined him last week in Brazil are “especially sensitive to the void of meaning and values that often surround them. And unfortunately they pay the price.

On the trip’s last final mass held at Copacabana Beach held last Sunday, sources at The Vatican stated more than 3 million people were on hand to partake in the mass. The estimation is far more than the 1 million who attended the WYD final mass in 2011 in Madrid or the estimated 650,000 at the 2002 vigil in Toronto.

Before the final mass many of the faithful spent the night on the beach due to an all-night slumber party that was held to close the festival. Participants prayed, sang, and danced the night away waiting for Francis to lead them in mass the following morning.

“We were dying of cold but it was worth it,” said Lucrecia Grillera, an 18-year-old participant from Argentina, but would not take back the cold night since “it was a great experience.”