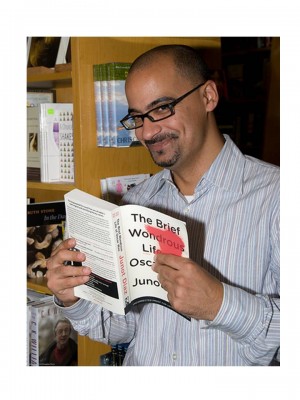 The accusation came after Díaz, along with Haitian American writer Edwidge Danticat, went to Washington, D.C., to urge congressional leaders to take action on what they describe as a human rights crisis in the Dominican Republic and Haiti.

The authors appeared together in June in Miami to discuss recent moves by Dominican officials to declare generations of Haitian immigrants to the Dominican Republic fair game for deportation: “Haitians and Dominicans with Haitian blood that came and worked after 1929, would be denied citizenship,” the Miami Herald reported

Díaz, who had visited the Dominican Republic earlier that month, said, “There’s a state of terror” in its capitol city, Santo Domingo.

“The last time something like this happened was Nazi Germany, and yet people are like, shrugging about it,” Díaz told Fusion. “Think about how much fear you would have to feel for you to suddenly pick … up and flee.”

Selman denies the claims of unfair treatment of Haitians and those of Haitian descent. In a Thursday’s statement he said, “We declare emphatically that the Dominican Republic has been clear to the world in implementing the immigration measures and there has been no case of violation of human rights or of statelessness with Haitian or any other foreigner, contrary to what sustains the writer Junot Diaz, who has proved antidominicano.”

Diaz has not publicly responded to Selman’s statement, his reps did not return our calls.