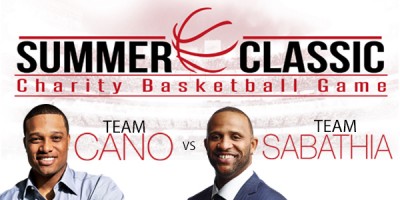 CC Sabathia’s PitCCh In Foundation and Robinson Cano’s RC22 Foundation unveil their Summer Classic Charity Basketball Game at Barclays Center on Thursday, August 21st at 8:00PM. Sabathia and Cano will serve as captains to two celebrity basketball teams which will be announced closer to the game.

All ticket proceeds from the event will serve to benefit both PitCCh In Foundation and RC22 Foundation. The Summer Classic Charity Basketball Game will feature a celebrity basketball game, a dunk performance, 3-point competition, half court contest, live auction and many other activations.