Crystal Shaniece Roman, CEO/Founder, of The Black Latina Movement is fierce! For the first time, all three of her plays – “Black Latina (The Play),” “Of Mothers and Men” and “Colors of Love” – will run together in a series. Roman, “We’ve had so much success on tour that we wanted to put [the plays] together in one place and rotate them so that audiences can see how they all relate.”

The Black Latina Movement Summer Series ’16 actually starts on Tuesday, August 23rd with a film screening of “The Trade,” a look at the world of human trafficking, by Michael Pinckney.  “I had been receiving many messages on social media about sex trafficking and wanted to kick off the week with a message that slave trafficking involves not just sex, but labor. There are tons of immigrants who work for barely nothing, and some don’t get paid at all,” Roman says.  After the screening, there will be a panel discussion. More info online.

On Wednesday, there is a Short Film Screening Showcase, produced by Roman and Shirley Reyes. Roman, “There are so many talented artists who don’t have the space, screens or money to showcase their work. We wanted to pay it forward and give them an opportunity to shine.” Visit http://blacklatinamovement.eventbrite.com/  for a full schedule. The films are 20 minutes each.

On Thursday the rotation of the three plays The Black Latina Movement has been touring with begins. For a quick synopsis of each, visit http://blacklatinamovement.eventbrite.com/. “These plays were a labor of love. I wasn’t a writer. I was an actress for seven years, but I wasn’t fitting into the image that the film industry wanted of a Latina. I got smacked in the face so often, I knew there had to be something better out there for me. I decided that I was good enough and that’s when I wrote “Black Latina (The Play).” It was all about finding my identity and feeling empowered,” says Roman. 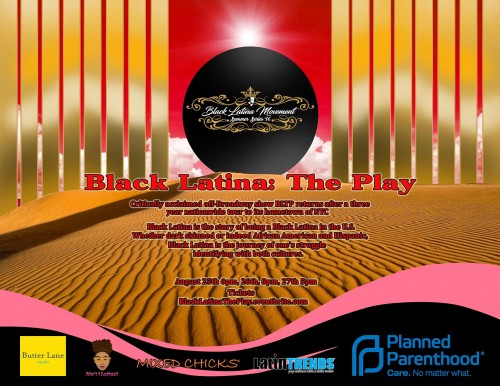 Two weeks after the Summer Series ’16 closes, Roman will be leaving for the Smithsonian Institute’s Hispanic Heritage Month Celebration where she will perform “Black Latina (The Play)” as a one woman show in D.C. Get your tickets at  http://blacklatinamovement.eventbrite.com/ now!