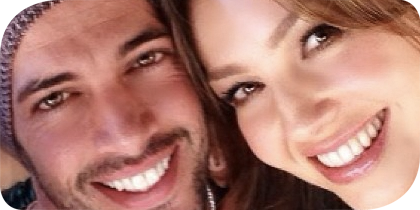 Rumors are spreading fast that Mexican star Thalia and Cuban actor William Levy will star in Televisa’s upcoming novela La Tempestad together. Levy has confirmed his participation in ‘The Tempest’, which will begin filming in 2013 but has yet to cast a female lead. Thalia has been the favorite in the polls for the actor to co-star.

Thalia wants to return to telenovelas and is in talks of making a mini-series with producer Salvador Mejia. Mejia is currently in pre-production of “The Tempest.” Levy and Thalia’s names have been linked for weeks but rumors resurfaced when they posed together with the host of El Gordo y la Flaca, Lili Estefan over dinner. Estefan posted the photo to her Twitter account along with the message: “When these two get together, sparks fly!! WOW # STARPOWER @Thalia @willylevy29 What do you think of this couple??” Hours later Thalia posted the same picture to her Instagram stating “What a good time spent among friends, pasta and laughter. William and Lili awesome!”

In an interview with Mara Patricia Castañeda Thalia stated “All producers are still sending me their great scripts. Let’s find the time and the project that is right for both times, so I have time to continue with my music and my life. But I love acting, I’m saving it for a special character, either on stage, film or soap opera.”

Unfortunately the participation of the singer in the soap may coincide with the promotion of her latest album, Habítame Siempre and with two major projects for the coming year which include to writing a second book and becoming a mother for the third time. The name of the actress that will co-star with Levy will be announced this month. Levy too has many projects for 2013 including the filming of Tyler Perry’s film “Single’s Mom Club” and the film adaptation of a book written by best-selling author Zane “Addicted.” Let’s keep our fingers crossed for this dynamic duo to co-star!