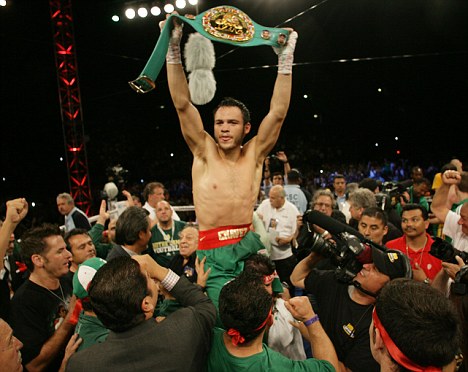 This weekend the world was introduced to a new middleweight champion. On Saturday in El Paso, Texas Julio César Chávez, Jr. became the holder of the World Boxing Council’s middleweight title after defeating Andy Lee. Chávez became the victor during the match’s seventh round which earned him a 46-0-1 rank with a total of 32 knockouts.

Watched by an estimated of 13,000 fans in the University of Texas Sun Bowl Stadium, the boxing match became the stage for the Sinaloa, Mexican born Chávez. Somewhat of a Mexican hero now, Chávez was welcomed to the ring by traditional music blaring with fans cheering him on as he arrived. “Go Chávez! Go Chávez!” the crowd welcomed before and after El Paso Mayor John Cook performed the National Anthem while using a guitar.

“During the first round, my legs were bothering me,” Chávez describes his nervous jitters prior to earning the title.

The match was welcomed by the attendees of the stadium and El Paso itself. Many in the Texas City were ecstatic about hosting the championship match. And the Mexican community was thrilled to see a fellow Mexican man up for a second-shot at the World’s Boxing Championship. El Paso resident Maggie Garcia said, “Nothing like this has ever happened! Nothing this big, especially someone who is Hispanic like César Chávez.”

While the boxing match made an impact stateside it attracted an international audience. Aside from being televised into the homes of millions around the world many fans crossed over from Mexico into El Paso to view the fight. Enrique Lopez, a student in Juárez, was one of the many spectators who crossed over from Mexico waving the Mexican flags. “He’s the son of a Legend,” Lopez said, mentioning Julio César Chávez fathered of the boxer who he has followed, “since I was little.

Like Lopez many fans have been waiting for the fight to take place. A few months ago the University of Texas temporarily called off the fight due to Chancellor Francisco Cigarroa’s concerns about the security of the match. There have been reports that the Drug Cartels of Mexico would threaten the match by some of its members being in attendance. The cancellation upset many El Paso and non-El Paso fans that showed up back in April to watch the fight.

The stadium itself is only about 500 yards away from the United States and Mexico border. The potential of violence to occur if rivaling Drug Cartels were appear and engage one another didn’t sway spectators. “I was pretty upset,” said Lopez about the cancellation in April, “I actually came to the press conference, and I was yelling: ‘please keep the fight!’”

And like the saying goes: The Show Must Go On, or in this case The Fight.