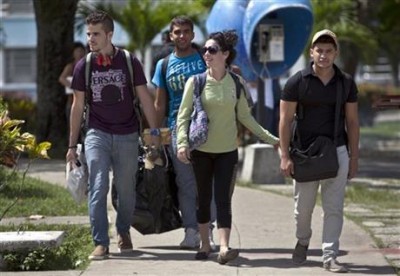 It sounds like something you would see on FX’s The Americans or something you’d read in the latest hottest young adult novel series like Divergent by Veronica Roth, but sometimes the absurd can be an item of truth.

Recently, an Associated Press investigation revealed that the United States of America allegedly sent Latino youth from several Latin countries on covert missions into Cuba to stir the fire among Cubans in order to bring forth an anti-government revolt.

According to the Associated Press findings, over the last two years the U.S. Agency for International Development has sent nearly a dozen Latino youths from Venezuela, Costa Rica, and Peru to visit Cuba and were assigned potential targets to get close to in order to incite opposition against Cuba’s communist government currently being manned by Raul Castro.

The U.S. Agency for International Developmenta—or USAID—is an agency that has been tasked with providing economic, development and humanitarian assistance around the world in support of the foreign policy goals of the United States, and has been identified as the main orchestrator of this operation.

The operation started under President Barack Obama’s first term while Hilary Clinton was Secretary of State. The timing was deemed right because it could begin a “new beginning” with Cuba after decades of mistrust and a lack of understanding.

Disguised as a HIV prevention workshop Latino youth travelers where set-up to visit college campuses and made friends with students. What was to be a social conversation on HIV information and prevention, travelers were assigned to identify potential political activist, get close to them, and profile those who could eventually stir a movement against the Cuban government.

However, the Latino youth program is just one incident among others in an effort to infiltrate Cuba.

Back in April, the Associated Press uncovered ZunZuneo which was an alleged U.S. secret Cuban Twitter project. The project was launched by USAID in 2009 and was established as a primitive social media network to be used under the noses of Cuban officials. The project was a way to increase the flow of information discreetly out of the country which is heavily restricted.

The White House still faces questions on this project. Despite the discovered doings of USAID, the agency still pertains to being helpful rather than mischievous when it comes to their alleged secret undertakings.

“USAID and the Obama administration are committed to supporting the Cuban people’s desire to freely determine their own future,” said the USAID, responding to questions written by the Associated Press, “USAID works with independent youth groups in Cuba on community service projects, public health, the arts and other opportunities to engage publicly, consistent with democracy programs worldwide.”

Meanwhile, some hard questions are being asked regarding the safety of the Latino youth who took part in this program. Questions which have a ground as to why the operation remain active considering the 2009 arrest of an American contractor and an U.S international development professional, Alan Gross.

Back in December 2009, Gross, 65, was arrested and accused of committing crimes against the Cuban government for bringing in satellite phones and computer equipment without the government’s permission. Gross was also said to be working covertly on behalf of the U.S. government in setting up Internet access in the country.

Showing that they will imprison any foreigner believed to be acting in disinterest of their country, the continuation of the operation in Cuba has placed the USAID and their contractor Creative Associates International under a larger microscope. Documents have also been acquired by the Associated Press which claims that U.S. officials allegedly privately disclosed to their government contractors to consider halting the operation and the sending of Latino youth into Cuba after Gross’s arrests.

“They arrested a contractor from another agency. That could be dangerous,” said one of traveler in a Skype message conversation between two Latino youth. “Thank God he’s not one of ours.”

The message is said to have been in-relation to the arrest of Gross, and shows the continued activation of the program despite the arrest of contractor-agent and worry of some U.S. officials.

“We value your safety,” said one senior USAID official, in an email obtained by the Associated Press to an official . “The guidance applies to ALL travelers to the island, not just American citizens.”

But how prepared were these Latino youth who traveled to Cuba?

Out of the numerous participants who were interviewed by the Associated Press, one said that they were given a worthless 30-minute seminar that taught them how they could evade Cuban intelligence had they been suspected of their anti-government activities.

“Although there is never total certainty, trust that the authorities will not try to harm you physically, only frighten you,” read a memo that was obtained by the Associated Press said to be given to a Latino youth in-regards to being exposed, “Remember that the Cuban government prefers to avoid negative media reports abroad, so a beaten foreigner is not convenient for them.”

In other documents obtained by the Associated Press there appeared to be no safety-net to aide inexperienced travelers had they been exposed as not being true tourists but rebellion-agitators.

Gross has served five years of a 15-year sentence in a prison on the island, and according to his attorney his physical and emotional health continues to deteriorate as he is still in prison.

The Associated Press also found that the travelers program had extensive measures to hide the Latino youth’s activities. The youth were given a set of codes in order to be used under particular situations like: “I have a headache” meant they are being suspected and monitored by Cuban authorities; “Your sister is ill” was a direct order to the Latino youth to cut their trip short.

To further evade Cuban authorities, Latino youth travelers had installed innocent-looking content onto their laptops which were to mask sensitive information that they were carrying. Also, they were required to use encrypted memory sticks to hide their files in-addition to sending out encrypted emails using a system. The encrypted emails, according to the Associated Press, were said to have a strong possibility of drawing suspicion.

In response to the discovery from the Associated Press that there were Latino youth travelers working for the U.S. government, a college student in Cuba

“How would you feel if you offered your sincere friendship and received this kind of news?” said Hector Baranda, a college student from Cuba upon learning that he was befriended by a group of young traveling Venezuelans who were working for the U.S. government to do a profile on him.

In the claims made by the Associated Press some of the travelers who took part in this operation were paid about $5.41 an hour, which is an estimation that is way below the U.S. federal minimum wage which stands about $7.25 an hour.

Although the Associated Press has released this investigation on this operation, there are no indications that the Latino America travelers who visited Cuba were able to sway a pro-democracy movement on the island.

The story is still developing.