A new series that portrays the story of Rafael Trujillo, a ruthless dictator whose voracious sexual energy drove women to destruction and determined the course of an entire nation El Chivo premieres on UniMás in September 23, 2014 at 10:00 p.m. ET/PT (9:00 p.m. Central). 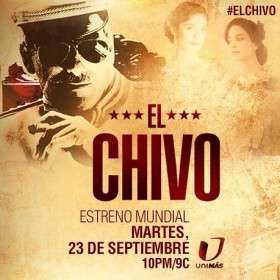 UniMás premieres El Chivo (The Goat), a new series based on the novel La Fiesta del Chivo (The Feast of the Goat) from the brilliant mind of Peruvian Nobel Prize in Literature recipient Mario Vargas Llosa, and produced by the creators of the hit series La Viuda Negra (the Black Widow). The grand premiere of El Chivo will be simulcast across the UniMás Network and UVideos digital platform.

Set in the 1950, El Chivo combines historical facts with fictional elements to portray dictatorial power in Latin America and the Caribbean through the life of the Dominican Republics most abusive dictator, Rafael Trujillo (Julio Bracho), known as El Chivo, whose regime was notorious for political persecutions, fascination for women,cruelty and corruption.

Trujillo overthrows the previous dictator and becomes president surrounding himself with an inner circle of loyal followers, including his own brother Práxedes (Abel Rodriguez), Rosita (Laura Ramos), an artist with a dark past, Johnny Abbes (Juan Sebastian Calero), an amoral character who becomes the terror of the regime, and last but not least, Mariana Duran (Eileen Moreno), his devoted wife and charismatic First Lady.

In addition, we meet Lazaro (Ivan Arana), a respected journalist who returns from exile in New York to unmask Trujillo, and eventually succumbs to the charms of the president, accepting the position of press officer for the government. An attraction grows between the first lady and Lazaro creating a love triangle with whom Trujillo considered his unconditional allies. Lazaro plays an important role in exposing the true face of the dictator.

A fearless leader admired by some and reviled as a monster to many, El Chivos voracious desire for power and sexual perversion in a rigidly hierarchical society marked by machismo, destroyed the women in his life and played a key role in the future of an entire nation.