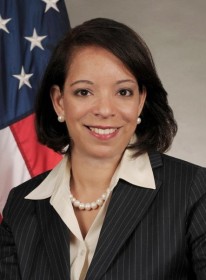 U.S. Secretary of Commerce Penny Pritzker today announced the appointment of Alejandra Y. Castillo, a New York City native born to Dominican immigrants, with more than 20 years of experience working in the private, government and non-profit sectors, as the new Director of the Minority Business Development Agency (MBDA).

“The success of minority-owned businesses is fundamentally essential to our nation’s economic vitality,” Secretary Pritzker said. “MBDA has been instrumental in laying the foundation that is giving rise to the fastest growing segment of the business community, and I am very confident that Alejandra will continue to maximize their opportunities.”

Castillo, a practicing attorney for several years, is the first Hispanic-American woman to lead the Agency, and only the second woman in MBDA’s 45-year history. Previously, Castillo served as MBDA’s National Deputy Director, managing the Agency’s day-to-day operations and its national network of more than 44 business centers across the United States and Puerto Rico.

“I am honored to accept this appointment as National Director of the Minority Business Development Agency,” Castillo said. “As the daughter of a Dominican business-owner, I have come to see first-hand the transformative role minority-owned firms play in their communities and the contribution they make to the nation’s economy. As National Director, I am committed to carrying out the Commerce Department’s ‘Open for Business Agenda’ to assist minority entrepreneurs grow their businesses in size and scale while continuing to generate job and wealth creation for all Americans.”

During FY13, MBDA assisted minority-owned businesses in obtaining more than $4.8 billion in capital and contract awards, which led to the creation and/or retention of 25,704 jobs, the highest performance level in the Agency’s 45-year history.

Alejandra Y. Castillo Bio:
Ms. Castillo first joined the U.S. Department of Commerce in 2008 as a Special Advisor to the Under Secretary for the Department of Commerce’s International Trade Administration (ITA). In this capacity, she was responsible for business outreach and intergovernmental affairs, as well as assisting in the development of policy initiatives geared at trade promotion and enforcement of U.S. trade laws.

A practicing attorney for several years, Ms. Castillo has worked in the private, government and non-profit sectors. Prior to joining the Obama Administration, Ms. Castillo served as the Executive Director of the Hispanic National Bar Association (HNBA), headquartered in Washington, DC. During her tenure at HNBA, she was instrumental in working with the White House and non-profit organizations, such as the Latinos for a Fair Judiciary, in support of the nomination and confirmation of Supreme Court Justice Sonia Sotomayor. Ms. Castillo served as a member of the Clinton Administration as a Senior Policy Analyst to the Deputy Director at the White House Office of National Drug Control Policy, and was responsible for developing and analyzing White House initiatives on anti-drug traffic and interdiction, anti-money laundering policies, as well as drug prevention and treatment programs.