United Airlines has been all over the news  lately, fueled by video below that went viral on social media. Video was taken by a passenger of another passenger, a Chinese American doctor savagely pulled from his seat, dragged out the plane and bloodied by the police. This unfortunate situation happened because the airline oversold the flight, then needed four seats back to fly crew members. The doctor, refused to leave, and we all know what happened. This man was a paying customer and he did not deserve this. He will most likely sue and he should. United loss over $1 Billion dollars in stock value the very next day, due to negative publicity. Ergo the power of video on a cell phone, AKA; citizen media, coined by Clemencia Rodriguez, US-based media and communication scholar of Colombian decent.

The media and the community at large have been hyper critical of United Airlines and rightly so, many are even calling for the resignation of its Mexican American CEO, Oscar Munoz… Why should he resign? It was the police that dragged this man out, with total disregard for his humanity, not Mr. Munoz. After this ordeal happened, Munoz quickly gave face, apologized and has taken action to make sure this does not happen again, he deserves credit for stepping up to the plate. United and all other airlines need to implement a plan to make sure that this never happens again. In this case, it’s the officers involved that need to be reprimanded, not the CEO. A CEO’s job is to run an effective and profitable business, by making sure that they provide proper service to its consumers and deliver profit to its shareholders, and Mr. Munoz has been doing both fabulously.

Another important factor to note and reason to support him, is that Oscar Munoz is one of only ten CEO’s in fortune 500 companies, that’s only 2% compared to the 17% of the U.S. population, however its better than none, which was the case 20 years ago. Numbers are trending in the right direction. We hope you support Mr. Munoz as the head honcho of a major American corporation, because U.S. Hispanics as a community and as individuals have come a long way, and he is one of them. A person of influence and achievement that kids can look up to and be inspired by. Its not just about song & dance for us, although believe it or not some people may think that’s what we’re about, education is key. However, so is wealth creation and to have a position, such as CEO of a global conglomerate is pretty impressive and that very position, helps position the community forward in both perception and reality from within and outside of it. We need more men and women like Oscar Munoz.

Since taking on CEO duties in September 2015, Munoz has transformed the fortunes of the beleaguered airline, galvanized staff, and set the business on a smoother course – all in the context of a tremendously difficult time personally. Only two months and change after having undergone a heart transplant, Munoz returned to his United CEO role full time in March 2016 following the health crisis that struck just six weeks after he took on the airline’s top job. 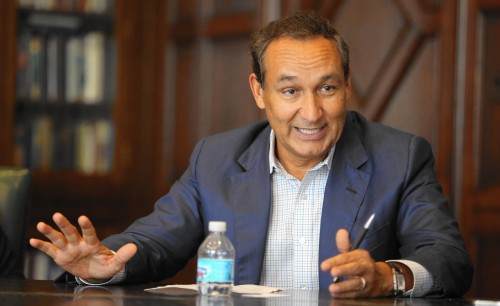 Munoz has shown himself to be a smart, dedicated, and excellent leader who understands the value of communications. His ability to connect and share with employees his vision for the airline, and get them to rally behind it, is a key reason PRWeek named him 2017 Communicator of the Year. Historically, United lagged behind its main rivals, American and Delta. But in 2016 the Chicago-based company’s stock price gained an impressive 27% over the year prior. In addition, the airline also had its “best full-year on-time performance” in history.

Critical to its success has been United’s ability, led by Munoz, to sign new contracts with all union groups, most well ahead of deadlines, helping to curtail customer service problems caused by disgruntled staff that had long plagued the airline. Munoz won praise from union bosses for his easy rapport with shop-floor workers, a rarity in any industry. Undertaking an extensive meet-and-greet tour across the United network, Munoz rebuilt employee confidence in the airline brand.

Employee distrust and discontent was at a high for United when Munoz landed in the top job in September 2015. Its last CEO, Jeff Smisek, abruptly resigned in connection to a federal investigation that he made quid pro quo exchanges with public officials. Media noted it was another failure for the company following its merger with Continental five years earlier that had still not bedded down.

Born in Mexico and raised in Southern California, Munoz climbed the corporate ranks in finance at PepsiCo, Coca-Cola, and AT&T before being named president of railroad operator CSX and then United.

He connected well with the airline’s pilots, flight attendants, mechanics, and other workers partly because of his blue-collar roots – his father was a union meat cutter – and he hasn’t been shy opening up to employees or media about his heart problems. He invited Fortune to follow him on the job, which resulted in a highly positive feature. Under Munoz’s vision for the brand, the airline hired Jim Olson away from Starbucks in February 2016 as SVP of corporate communications.

The company launched United Airtime, a platform for dialogue between Munoz, staff, and customers and held an internal leadership conference for more than 700 employees – the company’s intranet, Flying Together, enjoyed a 20% year-over-year lift in views.

Oscar Munoz, the charismatic CEO of United Airlines, will receive  PRWeek U.S.’s Communicator of the Year for 2017 – he is the fifth recipient of this title. Munoz will be present next Thursday at the PRWeek Awards 2017 gala ceremony to accept his honor – he follows in the footsteps of previous PRWeek Communicators of the Year Clementa Pinckney, Pete Frates, Edie Windsor, and Malala Yousafzai.

The Threads That Bind Bachata to the Blues
Amabell Rodriguez Feels Elevated & Accomplished @ Hostos
Translate »
%d bloggers like this: