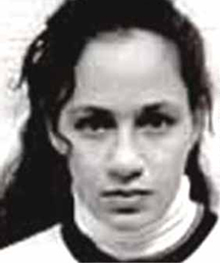 On Saturday afternoon, police responded to a call of an assault in progress, and found a woman attacking a 30-year-old man with a blunt object near the corner of Sheridan Ave. and E.169th St. The woman identified herself as Yesima Hernandez, but turned out to be Patty Carrion, one of America’s Most Wanted fugitives, who has been on the lam for the past 15 years for attempted murder.

Back in 1995, Carrion, who has associations with the Latin King Street Gang and the Ching-Ling Motorcycle Gang, shot a 20-year-old man point-blank in the chest and continued firing as he tried to get away, hitting him four times, in Meriden, Connecticut. Cops found a .32-caliber gun and 82 packets of cocaine in the trunk of a vehicle where Carrion has ditched the weapon. She subsequently went on the run, frequently disguising herself with wigs and makeup, and by dressing as an old lady or a young boy.

Carrion lived with a boyfriend, twin daughters, and another small child in a brick apartment on the Grand Concourse under the name Jocelyn for the last six years, but didn’t make a lot of friends. “She’s been a troublemaker the whole time she’s lived here,” said the building’s super, who declined to give his name. The super also said Carrion threatened his wife when he wasn’t immediately available to make a repair. “She’s an angry lady,” said neighbor Alex Encarnacion, 37. “A lot of people were afraid of her. I didn’t know she tried to kill someone, but that doesn’t surprise me. She had a very bad attitude.”

Are “Kid Entrepreneurs” the Answer?
Feds to dismiss some deportation cases