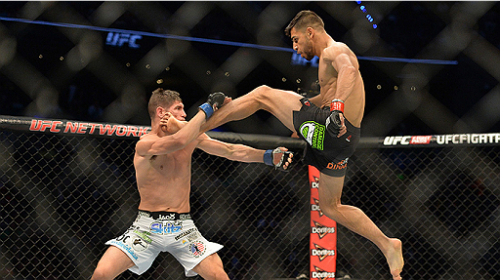 What we saw last night at the MGM Grand Garden Arena, which has become the home of the UFC, is the future of mixed martial arts. On the undercard of UFC 197 was the crossing of two featherweight boats in the night. One, Andre Fili, was sunk. The other, Mexican unbeaten, Yair Rodríguez, arrived in port with a great story to tell.

Yair, from Parral, Mexico, is a 23 year old who put himself on the map by winning The Ultimate Fighter: Latin America in 2014 under Head Coach, Cain Velasquez.

Yair is a lot like the new generation of kids who grow up playing realistic video games in which they experiment with moves that usually can’t be tried in reality.

Yair has changed all that. He currently has the third longest winning streak in UFC and has not only a good ground game but uses his long, powerful legs and unique agility to win in the air. He scored a flying knee that Edgar Juarez still doesn’t recall and last night he took out a very experienced Samoan 25-year old in Fili known as “Fury.”

“I knew it was going to be a hard fight for me,”

“But I don’t care. I’m here to fight the best guys in the world.”

But it was Yair that put out the flames in round two. Rodriguez tried a scissors kick that had just missed and his quickness was definitely something Fili had difficulty coping with.

“I saw when I closed his eye with a punch,”

“He was trying to step back and I could tell he couldn’t see so I just tried to do that switch-kick.”

Then it came. Yair lifted up in mid-air with his right leg bent and while still in the same motion kicked Fili with his left foot caving in the side of his head and flooring him out with no count necessary. It was the Karate Kid Crane Kick with a modern touch.

Indeed, Yair is a living video game come to life. But one to watch not only for his spectacular air attacks, but his rapid ground game and floor kicks which showed his ability to attack with a variety of techniques. UFC Featherweights are now on notice.

“They are trying to put someone up, and I want to be that guy,”

Yair responded to the question of his future.