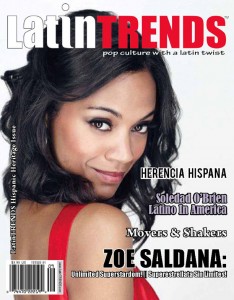 Zoe Saldaña on the cover of LatinTRENDS Sept 2011

Latina-American actress solidifies her position as an actress, looks to the future as a director, producer, writer, and business woman.

You saw her start as a young girl in “Center Stage”, “Crossroads”, and “Drumline”.
You saw her mature into “Pirates of the Caribbean”, “Guess Who” and “The Terminal”.
Now, after “Avatar”, “The Losers”, and the upcoming “Colombiana”, you think, wow, what’s next>

LatinTRENDS recently, exclusively, spoke to Zoe about her expectation both in and out of film. During the course of our phone interview, Zoe spoke passionately of her plans and prospects…and it seems that the sky is the limit.
“In 10 years, I see myself both in front of, and behind, the cameras. I intend to continue acting, but I have the short-term goal to start directing and producing since my passion is this (film),” Saldaña said confidently.

Of Dominican & Puerto Rican descent, and full aware of her biculturalism, Zoe is now editing “Kaylie”, her first short film. The film is a reflection of children living in the element of challenge, rejected by society either because of racism, ideology, religion or physical limitations, “Glamour Magazine green-lighted a budget for me to make a short. I remembered the tensions experienced by my niece when she started school in Los Angeles. And I thought of the internal struggle that disabled children must have. Along with my sister (Cisely), I decided to make this film as attribute to children with autism,” she explained.

This is not Saldaña’s first experience behind the lens: she also served as associate director of the Vin Diesel project “The Ropes,” a web/internet series scheduled to debut in the fall.

WITH THE CORPORATE SUITS
As you can imagine, Zoe’s agenda is very full. Right now, she’s in the midst of doing publicity for her sure-to-be-blockbuster film “Colombiana,” the aforementioned “Kaylie” and is, of course, reading screenplays and scripts for upcoming shoots. Despite this busy schedule, she makes time for meetings with show executives for a business project that, according to her vision, filled a niche in the industry: “Fashionista.” “My Fashion Database (www.myfdb.com) is a concept of a platform on the Internet where you can find a designer, a model, a photographer or anything related to the world of design and fashion,” said Zoe, who has modeled for RocaWear, Calvin Klein, Dewar’s and Avon, among others.

A GOOD PHYSICAL REGIMEN
Working in films such as “Avatar,” “The Losers” and “Colombiana,” has been a real challenge for Zoe: she had to learn archery, martial arts, horse riding and even heavy weapons handling. “I’m no stranger to weaponry, since I come from a family of hunters, but the physical work I had to do in recent years was quite demanding on much of my body. After all, I am getting older,” said Saldaña, who recently turned 33 on her last birthday (this past June).
And the sepia-skinned actress does not want to be pigeon-holed into a character or stereotype, and ensures that her upcoming, selected projects are of equal or greater than any previous role. “The story is everything. If I like the script, I do not care about money. It’s art. If it’s good, do the movie. That’s been my policy of selection and I keep to it,” said Zoe, who is set to filming “The Words” in Canada, where she co-headlines the indie film with Bradley Cooper.

Upon completion of the interview, Zoe had a few words of encouragement & wisdom for the kids who are looking for a place in the bicultural and global society of today. “Focus, and find a mentor to follow. Find someone with principles and values to help you move forward. Have faith that dreams come true.

Because they actually do…and that, Saldaña has proven.

DID YOU KNOW SHE WAS ALSO ON THESES COVERS WHEN WE WERE KNOWN AS DTM/DOMINICAN TIMES? 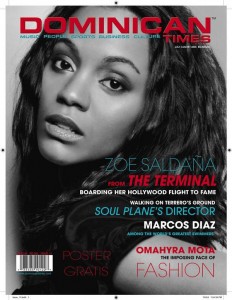