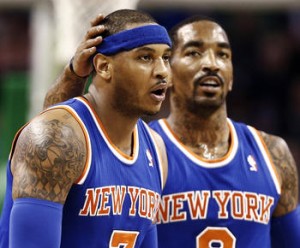 2013 NBA Playoffs: J.R. Smith (r.) and Carmelo Anthony (l.) have New York on the brink of completing a four-game sweep of the Boston Celtics.

Big Apple basketball fans haven’t witnessed the New York Knicks close out a playoff series in 13 years, but a victory over the Boston Celtics on Sunday ends that forgettable drought.

The contest featured some fourth-quarter drama, but it had little to do with how competitive the game was. With 7:06 left in regulation and New York leading 78-59, Smith was charged with a flagrant foul 2 and ejected for elbowing Terry on the chin. Celtics players and coaches had to restrain Terry, a 14-year veteran, after the guard got back on his feet, but Smith quickly made his way off the court without further incident.

As of 8:30 a.m. ET Saturday, the NBA has not revealed how it will, if at all, discipline Smith for his act. Smith could be fined, suspended for one game (Game 4), or both.