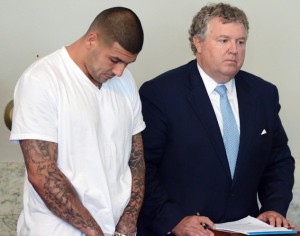 The ex-New England Patriot is alleged to have masterminded and carried out the “execution” of his former associate, Odin Lloyd, 27, himself a semi-pro football player.

The Patriots signed Hernandez to a five-year, $37.5 million ($15.95 million guaranteed) extension last August and released the tight end roughly 90 minutes after he was arrested at his North Attleborough home. He is being held without bail.

Here’s the full list of the charges Hernandez, 23, faces, as compiled by USA Today:

On 6/17/2013 did knowingly have in his possession, or under his control in a vehicle, a firearm … or a rifle or shotgun, not then being in his residence or place of business, and not having in effect a license to carry firearms or otherwise being authorized by law to do so.

Counts 5 and 6: Firearm without FID card

On 6/22/2013 did own, possess or transfer a firearm, rifle, shotgun or ammunition without complying with the requirements relating to the firearm identification card.