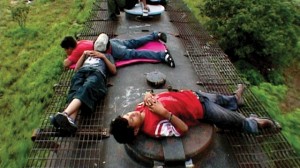 WHICH WAY HOME, an Oscar nominated documentary film about migrant children who risk their lives entering the United States, is now available on DVD and iTunes. Directed and produced by Rebecca Cammisa,the movie follows the lives of children from Central and South America who risk their lives by riding aboard Mexican freight trains to the United States in hopes for a better life. The film has received numerous awards including , including the 2010 Emmy® Award for Outstanding Informational Programming, the Robert F. Kennedy Journalism Award Grand Prize, and was nominated for a 2010 Independent Spirit Award for Best Documentary in addition to three more Emmy® Awards.

WHICH WAY HOME premiered on HBO in August 2009, and was featured in over 20 film festivals, including the 2009 Tribeca Film Festival and the 2009 Los Angeles Film Festival.

The DVD from Docurama Films features two Spanish versions of the film: one subtitled in English, with English title cards, and one non-subtitled, with Spanish title cards. Menus are also in English and Spanish. Bonus features include deleted scenes and additional information on the National Center for Refugee and Immigrant Children.

In an interview by HBO, Ms. Cammisa explains her motivation for creating the film and what she hopes the audience will take away:

“I want this film to be used as a tool for creating immigration reform in the Unites States and Mexico because children are suffering and even dying while migrating north. What side of the immigration debate you’re on doesn’t really matter to me. What matters is that the public-at-large is provided visual documentation that enables them to really see what is going on. Hopefully once people watch this film, they will gain a clearer understanding and compassion for the people who are trying to get here.”

For information about the film, visit http://www.whichwayhome.net