The FWE (Family Wrestling Entertainment) Wrestling promotion is coming to New York this Saturday February 7th, to the Resorts World Casino New York for its “No Limits 2015” show. As part of its tag team attraction Bandido, Jr will team with Trent? against the “Juicy Product.”

Bandido, Jr. a Newark native has wrestled for several promotions but started in Puerto Rico, following his father, Bandito. He has worked over the years and collected several regional major independent titles. 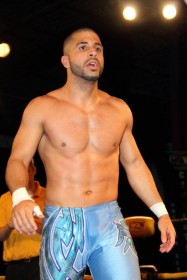 He will be the lone Latino star on this card and will provide a lot of high flying action that evening. As he mentions on his facebook page.

Dare to defy. I’m always the underdog, but I never expect to lose.

Look for the latest interview with Bandido, Jr. following “No Limits 2015”