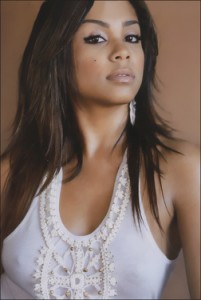 Claudette Ortiz (born July 21, 1981) is an American singer and model, most famous as the female in the R&B group City High.

Throughout high school Ortiz dated future bandmate Robby Pardlo; after an abusive one year relationship the two split in 1998; but continued to work together musically. After meeting and performing for Wyclef Jean, they were signed to his Booga Basement recording label. As Wooga Booga already a duo, they asked Ryan Toby to join and became a trio.

She was featured on Wyclef Jean’s track “Dance Like This” on the Dirty Dancing: Havana Nights soundtrack. In 2006 this song was remade by Shakira into the massive global success Hips Don’t Lie.

Other artists she has worked with include Nas, Ja Rule and Mase ( Can’t GetEnough.

In November 2002, Ortiz appeared on the episode “Jr’s Dating Dilemma” on ABC’s My Wife and Kids