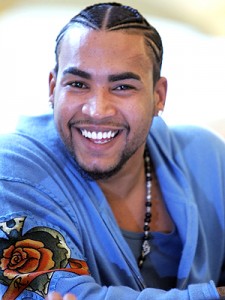 William Omar Landrón is the oldest son of William Landrón and Luz Antonia Rivera. He was raised in Santurce, a barrio of San Juan, Puerto Rico, specifically in the Villa Palmeras area. From an early age, he showed interest in the music of Vico C and Brewley MC, but never actually followed it. During his youth, he became an active member of a Protestant church, Iglesia Evangélica Restauración en Cristo, in Bayamón where he occasionally offered sermons. However, after four years, he left the church to dedicate himself to a singing career.

His first significant appearance was on the 1999 album Operación Sandunga, on the song “Déjame cazarlos”. Several months later, he had his first public presentation in a night club, accompanied by discjockey Eliel Lind Osorio. Afterwards he appeared regularly on compilation albums from popular DJ’s and producers like Luny Tunes, Noriega, and DJ Eric. He also started working as a backup singer for the duo Héctor & Tito. One of the members, Héctor Delgado, helped him produce his first solo album. He is currently signed to VI Music and Machete Music through Universal Music Latino.

Don Omar confirmed the name of his upcoming collaborative album, titled Meet The Orphans. The single “Hasta Abajo” was released in advance of the album. The album is set to be released on August 24, 2010 through Orfanato Music Group.