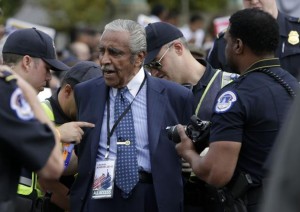 Yesterday, an estimated 200 people were arrested in Washington D.C when protesters blocked a main street near the Capital. Among the arrested were at least eight Democratic Members of the House including Congressman Charles Rangel. Congressman Rangel and the other arrestees were taking part in a massive rally that was aimed at pushing Republicans to hold a vote that was placed on a stalled Immigration Reform Bill.

The arrests began around 4 p.m. EDT on October 8th, 2013. According to Law Enforcement, the arrested will be charged with “crowding, obstructing, and incommoding,” the block which falls under laws of the District of Columbia. Also, Law Enforcement would not identify who were among the arrestees.

Although Police would not name the arrested witnesses were able to identify who was arrested. According to Representatives of the Social Policy Organization Center for the Community Change and the Associated Press Representatives John Lewis (D-Ga), Luis Gutiérrez (D-Ill), Raúl Grijalva (D-Ariz), Keith Ellison (D-Minn), John Crowley and Charles Rangel (D-NY), Al Green (D-TX), and Jan Schakowsky (D-Ill) were seen being seen carried away by authorities.

Other rally attendees arrested were members from such groups as United Farm Workers and Farmworker Justice.

The rally was held in response to the hopes of the comprehensive immigration bill passing seeming impossible. If the bill is successful in passing a 13 year path to citizenship will be put into place for those already living in the United States. The path of citizenship will make their lives easier since they will no longer have to fear living in the states illegally. The bill will also give billions of dollars to border control.

The bill is backed by the Senate which is held by the Democrats, however it is unclear if the House which is held by the Republicans will pass the bill that will allow the Senate to form the final deal of the bill. Most members of House Republicans already rejected the comprehensive approach. Meanwhile, the House of Judiciary Committee has moved forward with single-issue individual immigration bills that will go to the floor sometime this year or next year.

The White House has released a statement regarding the rally and its effort to move the House to back the immigration bill, “The enthusiastic demonstration of support for immigration reform this week has proven to Congress that the broad coalition behind commonsense solutions to our nation’s broken immigration laws is as strong as it has ever been,”

Press Secretary Jay Carney adds in the statement, “It’s time for the House of Representatives to reopen the government, pay their bills and get back to the important work of moving the economy forward.”

Before he was arrested with his fellow Representatives, Luis Gutiérrez said that he planned the act of civil disobedience during the rally so that “the speaker of the House can free Congress and finally pass immigration reform.”

No statement has been released yet about Congressmen Charles Rangel and his arrest in response to representing his constituents.

PBS honors Latino Americans with Historical Documentary
LGBT-Identified Latinos on the rise in America
Translate »
%d bloggers like this: