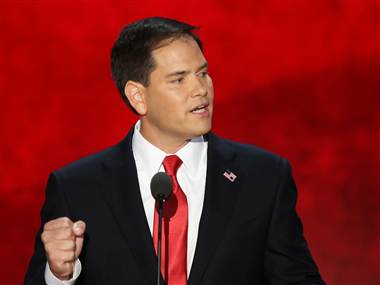 As though history is repeating itself, Senator Marco Rubio of Florida, and one of the Republican candidates seeking the party’s nomination to contend for the Presidency in the upcoming election, found himself in the hot seat when posed a question in-regards to possibly being a “flip-flopper”.

During an interview on Sunday on Fox News Sunday, Rubio refused to address his belief on whether or not the Iraq War was a mistake. Despite his clear attempts to avoid answering the question, host Chris Wallace continued to ask Rubio his opinion on whether the Bush Administration should have invaded Iraq back in 2003.

Although Rubio decided to forego answering the question during the interview, Wallace played a clip of Rubio commenting on the war stating that he nor President George W. Bush would not have back the war in Iraq. While he seemingly expresses a somewhat disapproval of the war in the above viewed clip, there was another clip played and was recorded back in March 20 in-which Rubio expressed a different opinion of the war.

When asked by Wallace to explain the difference in opinion, Rubio responded that the questions asked in the two clips were different and that “based on what we know now, I wouldn’t have thought Manny Pacquiao was gonna beat [Floyd Mayweather Jr.] in that fight a couple of weeks ago,” opting to escape addressing the question fully with a straight answer.

Not backing down, Wallace continued wanting Rubio to give a direct answer on whether or not the war was mistake. However, Rubio avoided the question commenting that the war was “not a mistake, given what the president knew at the time,” but despite this Wallace questioned Rubio for several minutes wanting him to provide an answer which Rubio failed to do.

Much like Rubio had in answering that hot button issue, Governor Jeb Bush—who is also seeking the Republican nomination—had a similar problem expressing whether or not he felt the 2003 war was a mistake. But what is different in the response with Rubio is probably due to the fact that he has expressed ideas that do not particularly mesh well with those within his own party, so when he has expressed views that go against what is commonly accepted by those he wants to represent it could harm him when it comes to taking the Republican nomination and possibly winning the election.

If he ever makes it that far.

The interview with Rubio was very similar to two issues met by President Barack Obama and the former democratic candidate seeking the presidency Senator John Kerry. When both democratic candidates were running, Obama was being criticized as being too “new” or “young” to be able to manage foreign policy meanwhile Kerry was condemned and seemingly hit hard when he was nicknamed a “flip-flopper” because he was known for have two views regarding an issue.

Much like the two candidates above, Rubio could face the outcome of Kerry if his party and constitutes sees him as someone who cannot stand by his viewpoint. However, when it comes to foreign policy Rubio has yet to show he has any true prowess in it as Obama did when questioned during his first campaign. The race for the presidency is just starting, and Rubio can expect to find other challenges that await him.