When Emilio Sosa was three years old, his family made the great pilgrimage from Santo Domingo to The Bronx—and stayed. Their exodus was, as Sosa puts it, an effort to chase after the “American Dream.”“But we struggled,” he told LatinTRENDS at a recent press event.

Now Sosa, 43, who you may recognize from Season 7 of “Project Runway,” is designing for the iconic Rockettes—or,as he tells it, achieving that American Dream.Despite his early struggles,the young Dominican-American began studying art early and eventually become a TONY Award-nominated costume and fashion designer.

“My mother, bless her,never let me  go without,” he said. “I always had art supplies.” Sosa added that though it wasn’t easy for his father to accept this artistic dreams, he did.This year, the Rockettes New York Spectacular will open June 15 and run through August 7. In 2015, the show sold nearly 300,000 tickets over the course of its eight-week run. Previously,the show was called the New York Spring Spectacular, but has been rescheduled for the summer to accommodate the tourists that flock to the city then.

“During the summer months, New York City sees a significant increase in tourism and shifting the production will provide an opportunity for even more people to experience this dazzling musical celebration starring the Rockettes,” said David O’Connor, president and CEO of The Madison Square Garden Company, in a press release.Sosa joins a long legacy of costume designers and other theatre artists whose work has made the Rockettes an American stage classic.But even though the precision dance company has performed at Radio City Music Hall in Manhattan since 1932, nothing about the show feels old.The Rockettes have gotten a major makeover. The show has been modernized for a contemporary American audience that loves today’s pop music and threads from a fashion-forward thinker.But Sosa isn’t giving anything away about the new looks.

“Come to Manhattan,” he said. “You have to see this show.” 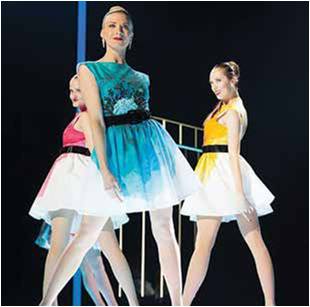