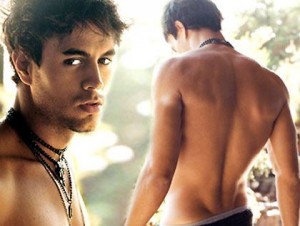 Though he says he won’t get around to touring before the end of the year, if you’re in Miami, you might get an even better kind of show from Enrique Iglesias this summer.

He told People that he plans to keep his World Cup promise that he would water ski naked if Spain won. And it could be sooner than we think. According to him,  “I’m just waiting for a day off. A bet’s a bet.” Will someone get this boy a day off?

According to him, he plans to do it in the Biscayne Bay at night to avoid getting caught. Though apparently, he used to do it in high school all the time and never got in trouble. Why no one ever alerted me to this before, I’ll never know.

Possible arrests don’t seem to phase him, but sharks do. The sexy singer said, “The only thing I’m worried about is if you fall at night, there’s sharks in the water.” And aside from his safety, Iglesias is also conscious of his grooming: “I need to get my Brazilian wax before I do it.”

We can’t wait. Remember, Enrique: pics or it didn’t happen!