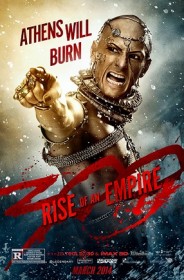 RODRIGO SANTORO (Xerxes) was already an award-winning actor in Brazil when he gained fame in the United States and around the globe. In “300: Rise of an Empire,” he reprises his role from the 2007 worldwide hit “300,” directed by Zack Snyder. For his performance, he became the first Brazilian actor to receive an MTV Movie Award nomination.

Santoro’s first American film was 2003’s “Charlie’s Angels: Full Throttle,” followed later that year by the hit romantic comedy “Love Actually.” In 2004, he won the Cannes Film Festival’s Chopard Trophy for Male Revelation. Since then, he has starred in a variety of films, including David Mamet’s “Redbelt”; Pablo Trapero’s “Lion’s Den”; both parts of Steven Soderbergh’s “Che”; “I Love You Phillip Morris,” for directors Glenn Ficarra and John Requa; Kirk Jones’ “What to Expect When You’re Expecting”; and “The Last Stand.” Santoro starred in the title role in “Heleno,” about the famed Brazilian soccer player, and also produced the film, which premiered to great acclaim at the 2011 Toronto Film Festival.

Additionally, he voiced a lead role in the animated feature “Rio,” and will be heard again in the sequel, “Rio 2.” Among his other upcoming films are “Focus,” reuniting him with Ficarra and Requa; Gavin O’Connor’s “Jane Got a Gun”; “Pele”; “Rio, I Love You”; and “The 33.”

On television, Santoro had a regular role on the third season of ABC’s hit show “Lost.” He also co-starred with Nicole Kidman and Clive Owen in Philip Kaufman’s HBO movie “Hemingway & Gellhorn,” and with Helen Mirren in Robert Allan Ackerman’s “The Roman Spring of Mrs. Stone,” for Showtime.