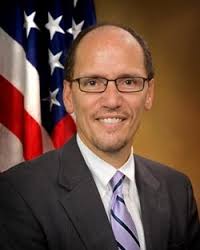 Thomas Perez has become confirmed as the first and only Latino cabinet member under president Obama as Secretary of Labor. He’s won the support of his fellow Dominicans, and the Latino community as a whole, nationwide, including NYC councilman Ydanis Rodriguez. “This is a watershed moment in the experience of Dominicans in the U.S. and announces to the country, we will be active in this country at a national level for generations to come,” he said. The executive director of CASA de Maryland, the state’s largest Latino rights organization, congratulated him and sited what good Perez had done when he was president of the board of directors. President Obama said himself that Perez is the embodiment of the American dream. But with much Democratic support, along with a 54-46 vote, comes Republican opposition. Senator Ted Cruz, R-TX, said he was “disappointed”. Sen. Cruz and other Republicans say Perez selectively enforces laws according to his own political views.

The U.S. Launch of Telefónica’s Global Millennial Survey hosted by AS/COA
Ariel Castro is sentenced to life, without parole, plus 1,000 years
Translate »