The year was 2002, when I heard Aventura’s song “Obsession” (they were literally unknown then), I could NOT believe it.

I WAS AMAZED! and said to myself “MY GOD” this group is going to be BIG!! because when I heard them singing the lyrics and music of Obesession” I saw in my mind the representation of a new generation of US Latinos through their music.

The way they effortlessly fused bachata with elements of Hip Hop, R&B, and even Rock was epic and right there and then, I knew they were special and that they were going to be big.

I must confess, I didn’t believe later on that Romeo, (Anthony Santos) would be as big star as a solo artist as he is today.

Anthony Santos (artistic name Romeo), the lead singer used hip street slang in English while signing in Spanish with a New York flair, words such as: “ Let me find out”  and others, and in doing so was able to be relevant with bi-cultural Latinos and later, main stream.

Romeo and the Aventura band members, who are all related,  followed their love of Bachata music even while being born and raised in the South Bronx.

They grew up listening and enjoying different music genres from Hip Hop to punk rock, yet they end up playing bachata music and revolutionizing it, to where it is today.

Aventura and their sound played an important role in the global popularity and growth of Bachata music. It is no longer a music which was only heard in the poorest “barrios” and in the “cabaretes” of the Dominican Republic.

Aventura and their bachata have reached millions throughout Latin America, Asia, Europe and in all 50 States within the U.S., it even reached the white house, when the group performed there for President Obama and his guest during  an Hispanic Heritage event  in 2009. see video below.

The group  have has sold out stadiums through out the world and unifying people, in the way that only music can.

In case you did not know, Johnny Marines. is the manager of Romeo and was also the manager of Aventura. Johnny was  a recent recipient of The Latino Trendsetter Awards, an event produced by LatinTRENDS, click on his name to see video on this.

Romeo graced our second cover at the very beginning of our history back in 2002 when this the magazine was known as Dominican Times and later on with the whole group as Aventura. See below

Magazine covers of Aventura when LatinTRENDS was known as Dominican Times 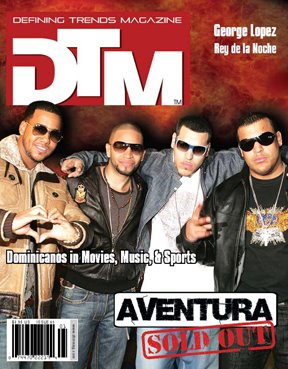 Aventura and Romeo as a solo artist changed the game, simply by working hard doing what they love  and in doing so they discovered what they most likely knew before anyone else, that they had talent!

When we broke Aventura in 2002 and in 2003 with their first covers  Bachata was  still  considered ghetto… music for the underclass by the upper class and elite of the Dominican Republic.

Aventura made bachata cool, sexy and accepted. They took this music that was born in the bordellos  (prostitution houses) of The DR and its dark but colorful past to new heights.

To this day Bachata music is still referred to by many Dominicans as “corta vena” (wrist cutter) and  “La musica del amargue” because of it’s emotional lyrics and themes, such as;  “she left me” “she no longer loves me”  “I’m poor, sad and ugly”

Batcahata’s other nickname is music of sadness-music of blues. Lately and in part because of Romeos talent and movement, its lyrics have gotten a bit more refined, but Romeo has been able to keep the essence of the genre in place.

Others that have followed his lead and they are shining in their own light as modern day/ urban bachata artist such as: Prince Royce and Leslie Grace.

We can’t forget some original bachata legends like : Anthony Santos, Luis Vargas, Yoscar Sarante, Joe Veras, Frank Reyes, Raulin Rodriguez, El Torito, and Juan Luis Guerra, who is not known as a bachata artist per se, however, he does have some big bachata hits. 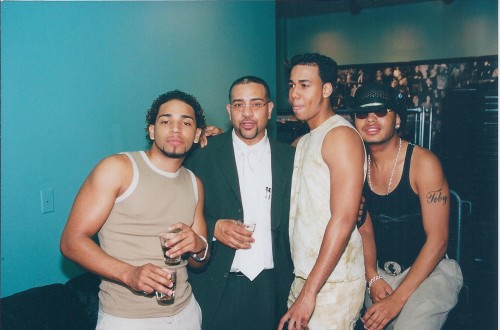 Thanks to Romeo Santos and Aventura and to their manager Johnny Marines bachata has not only lived on and grown beyond its humble beginnings but will keep soaring to new heights.

It has the potential to keep growing and gaining listeners and fans because bachata music is multidimensional, It can be mellow but aggressive, at times its healing, other times it can rile you up.

You can fall in love and out of love with it.  You can chill to it, you can dance to it  and you can sing to it. Bachata has it all and the world over is loving it.

Update
The band separated in 2011. Anthony and Henry embarked on their own solo careers while Lenny and Max Santos joined Steve Styles from the bachata group Xtreme to form a new band, called “Grupo Vena.”

As a group Aventura has held various reunion set of concerts  from time to time and diffrent states in the U.S. and in different countries and each time, these concerts  have sold out