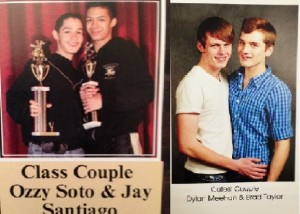 Earlier this week, Dylan Meehan and Brad Taylor became media sensations when a photo of the two posted on a friend’s tumblr blog was reblogged close to 100,000 times. What was so special about the photo?

The photo was taken from the couple’s Carmel High School year book where the two happy young males were voted the cutest couple.

The New York couple’s friend, Chelsea, posted the photo from their high school yearbook with the caption: “Two of my best friends won Cutest Couple of our senior class. First time in my school history a same sex couple has even been able to run for this category, not to mention winning it. So proud of them, and my school.

In an email about their recent media coverage, in a shared email Meehan and Taylor disclosed how the attention has “been a bit surreal for us because we have been raised to believe that love is love,” and the support they have received has led the two to “believe that our affection for each other is normal…When we started dating a year [ago], the thought of a photo of us traveling throughout the world would be a bit frightening, but now we are proud to be part of the LGBT community.”

While the two, along with classmates and the school, have set forth a positive message they were not the only two to show support for young gay couples.

In 2008, Jose Santiago and Osvaldo “Ozzy” Soto were voted “Class Couple” at James Madison High School in Brooklyn. So, when fellow classmates saw Meehan and Taylor’s photo drawing attention the couple from Brooklyn received messages informing the pair they were the very first to be given such an award and should come out with their own story.

Santiago and Soto began dating in 2006 and five years after winning the award, the Santiago and Soto are still together and living in Brooklyn. When the couple looks back on the award and their photo they can’t but laugh at the trophy the pair were given in recognition for their 2008 title.

“They had a boy and a girl on top of them,” Santiago said, in an interview with the New York Daily News about his and Soto’s photo. “So, yeah, that was kind of funny.”

Like Meehan and Taylore , Santiago and Soto didn’t experience any bullying because of their relationship amongst fellow classmates. And like the couple from Carmel High, Santiago and Soto aren’t merely “the first” but simply another couple who made history within their own high school and now the world by stepping forth and becoming figures to live up to due to their courage to embrace who they love.