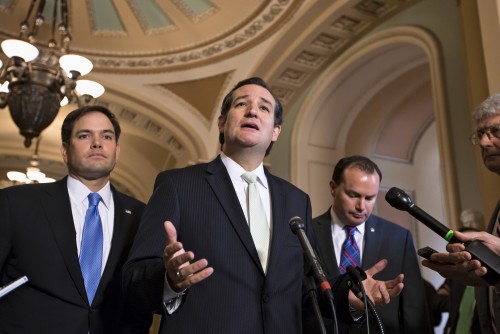 Sen. Ted Cruz, R-Texas, center, accompanied by Sen. Marco Rubio, R-Fla., left, and Sen. Mike Lee, R-Utah, right, express their frustration after the Senate passed a bill to fund the government, but stripped it of the defund “Obamacare” language as crafted by House Republicans, Friday, Sept. 27, 2013, on Capitol Hill in Washington. The Republican-controlled House and the Democrat-controlled Senate are at an impasse as Congress continues to struggle over how to prevent a possible shutdown of the federal government when it runs out of money in three days. (AP Photo/J. Scott Applewhite)

The question is valid. The possibility is now as close to reality as its ever been in the history of the United States most coveted political position, The Presidency. If you look at the Republican party side you have a very loud runner in Donald Trump. But running against him is a Texas Latino named Ted Cruz and Florida Cubano in Marco Rubio whose cultural demographic makes up a quarter of a nation that shares their Hispanic Heritage.

The reign of President Barack Obama technically cannot run for a third consecutive term. So the door is open for something different but whose time may have come. It appears on the Republican ticket that the contenders will be an all-Cuban affair with Cruz and Rubio going for the ticket.

US Senator from Florida Marco Rubio addresses the audience at the Tampa Bay Times Forum in Tampa, Florida, on August 30, 2012 on the final day of the Republican National Convention (RNC). The RNC will culminate later today with the formal nomination of Mitt Romney and Paul Ryan as the GOP presidential and vice-presidential candidates in the US presidential election. AFP PHOTO Stan HONDA (Photo credit should read STAN HONDA/AFP/GettyImages)

Rubio, 44, has been serving in political office for 15 years to only two for Cruz. Both men have been senators, but Rubio has held more positions which gives him the edge minus the fact that Cruz, 45, was the domestic policy advisor to Bush’s presidential campaign in 1999-2000. Rubio, with a BS from University of Florida and a JD from the University of Miami has parleyed that to a Political Analyst position for
Univision.

His looks and son of hard-working immigrants speaks to many who can relate to that.

“My dad was a bartender. My mom was a cashier, a maid and stock clerk at K-Mart.”

But the deciding factor could be Cruz traditional political road which is recognized by those who bankroll and support Presidents. Cruz has worked in Law positions reflecting his JD from Harvard Law School, which followed his time in Princeton University.

“In both law and politics, I think the essential battle is the meta-battle of framing the narrative.”

Strangely they share the same views as far as individual rights, domestic and economic, and defense issues. But despite the perception of Cruz as a rebel and one to follow his own path, he has raised more money than Rubio and that says alot in the long run. Either way, they relate to America on two fronts while Trump is prince of one group and that had never won an election.