To Be or Not to Be: The Future of San Juan’s Luis Muñoz International Airport

To Be or Not to Be: The Future of San Juan’s Luis Muñoz International Airport 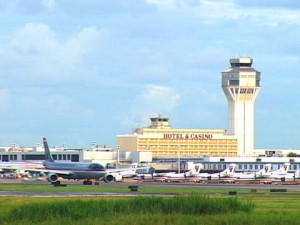 Stationed in the beautiful island of Puerto Rico, San Juan’s Luis Muñoz International airport is considered one of the largest international airports in the Caribbean. With this renowned title, it is understandable why the country would utilize this asset as a means to aiding the island however in doing so the country has generated some negative backslash.

Despite the protests the deal had generated, it has gone through because of the potential good it may do for the island.

Under Puerto Rico’s prior administration of Governor Luis Fortuño, Fortuño began to strike a deal with Aerostar Airport Holdings, a private Mexican firm, which entailed the “handing over the keys” of the airport so that it can be operated by the firm for a total of 40 years. But not all Puerto Ricans were, still are, happy about this deal.

Back in February, the proposed deal regarding the concession to operate Luis Muñoz Marin International Airport incited a series of protests. If the airport is handed over to a private firm, many of Puerto Rico’s Ports Authority union employees and their allies feel the privatization of the airport will lead to the loss of stable government jobs, reduced wages for its employees, and a potential increase in traveler airfare.

Organized by People United in Defense of the Airport the demonstrations, typically held outside the headquarters of Puerto Rico’s Ports Authority, demanded that the airport be managed by a public servant rather than handed over to a private firm.

Protestors also have called for Puerto Rico’s current governor to revoke the deal. However, the current Governor Alejandro Garcia Padilla and his administration came out in support of the deal struck by the prior administration and will honor it.

“Puerto Rico gave its word and we must be firm and transparent in honoring it,” Garcia said just hours before the deal would have expired. Garcia made the announcement with dozens of protesters also gathered outside his office promising civil discord in upcoming weeks if he did not redraw the deal.

In the deal with Aerostar—a joint venture enterprise consisting of Highstar Capital, an infrastructure investment firm and a Mexican airport management from Grupo Aeroportario de Sureste—the country will turn over the operations of the airport for an estimated $2.6 billion. The very large sum generated from the deal will go into paying back some of the country’s debt that would hopefully turn the economy of the country and its people for the better.

Currently, the Ports Authority has an estimated $940 million debt to pay back and in announcement about the deal, Garcia said how “the Port Authority has zero dollars to invest in this airport. As everyone who has visited the airport knows, its infrastructure has to be improved greatly and quickly.”

Juan Rivera, the Port Authority spokesman, said the Luis Muñoz airport gets an estimated 8.5 million passengers a year and is served by 20 airlines; these airlines make more than 150 flights daily. Despite its activity, the government has struggled to increase its passenger traffic, expand the airport, and make improvements to terminals and taxi ways and runways which is necessary to increase traveling traffic.

The accepted deal is believed, by the Port Authority and Government officials, to be essential in renovating the islands other regional airports and its cruise ship piers. While the deal looks promising it is understandable while some protest against it.

Change does bring out the good in a scenario but the fear of it going wrong may be more burdensome because it is the unknown that cripples. The word privatization is also a inhibiting world that may bring to not seeing the potential good that may arise. Change is worrisome but one is necessary when it comes to progressing forward in today’s world, all the best to Luis Muñoz International Airport and its people of Puerto Rico.