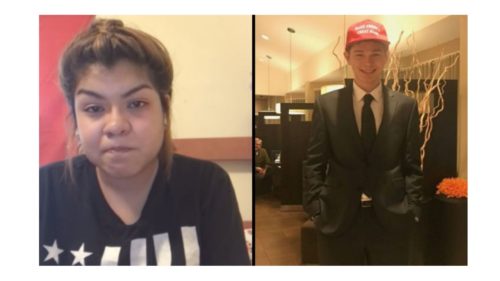 A young man with wickedness in his heart and ignorance in his being named Tayler Ragg, received some all-mighty karma, after reporting the undocumented classmate and calling others to do the same on social media. You see, it was Ragg, himself that got kicked out of school, Transylvania University in Lexington Kentucky, according to local news outlets

This is a classic case of karma in action.  Taylor Ragg, is a Trump-supporting college student, who tried to get an undocumented student at his school deported, and was then himself expelled.

The ex-Transylvania University student had posted a screenshot of an undocumented classmate’s Facebook with the words: “Everyone go report this illegal at my school.”

He has since deleted his account and been kicked out of his college.

The young woman he targeted, Paola Garcia, was the target of hateful harassment and threats online thanks to Ragg. However, Paola shares in a video that she fought back against the hate—by exposing the hateful messages and reporting them to the school.

The video describing what she went through. She was sent abusive messages like, “I can’t wait till your f****** c*** ass is gone,” “You and your n***** boyfriend need to leave” and “Hope you enjoy your visit back to the dirty floors of your homeland, stinky ass.”

At the time she posted the video, administrators said they couldn’t do anything about the posts, but it looks like they changed their minds. A  spokesperson from Transylvania University confirmed that Ragg is no longer a student.

I’m not sure if he learned his lesson and I am sure he will go to another college and eventually get his degree. However, I am glad there were clear consequences for his awful behavior, said Paola.

Paola was brought to the U.S. by her parents when she was only two years old. She is politically active on her college campus, publicly opposing some of the president’s policies, but with President Trump threatening to end the program for immigrant children Garcia is worried about eventual deportation, reported CBS.

The Strange Tale of The US Hispanic Chamber of Commerce President
Karma in effect for Racist Lawyer Aaron Schlossberg With His Life in Ruins
Translate »
%d bloggers like this: