Originally published in the Jul/Aug 2016 issue of LatinTRENDS Magazine

The Latino Faces of the UFC

Latinos have a long and storied history in the world of combat sports. In boxing, legendary figures such as Julio Cesar Chávez and Oscar De La Hoya proudly touted their Latino heritage while winning championships and glory. At the dawn of the Ultimate Fighting Championship (UFC) and mixed martial arts, Royce Gracie was its first dominant superstar, more recently followed by Anderson Silva, long considered the best in the world.

Carrying the banner for Latinos in the sport are now two rising stars: Dominick Cruz and Henry Cejudo. Cruz is the reigning UFC Bantamweight Champion while Cejudo is an Olympic gold medal-winning wrestler. Both are budding megastars and both are keenly aware of their status as Latino stars in a sport that gains popularity every day. 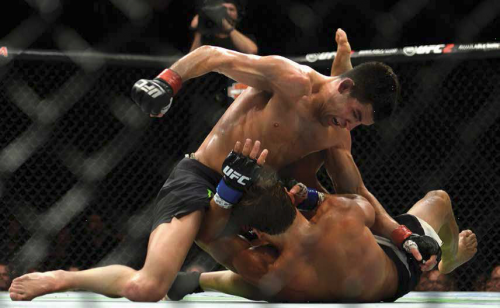 Growing up in Tucson, the man they call “The Dominator” was introduced to combat sports quite literally by accident. “I got into wrestling in the seventh grade and I got into [it] because I walked into the wrong room,” he said. “The coach said I wasn’t a soccer player, I was a wrestler. I started practicing that day and haven’t stopped since.”

After an undefeated amateur career, he had a successful career in the now defunct World Extreme Cagefighting (WEC) promotion, becoming its last bantamweight champion before it was absorbed by the UFC. It wasn’t long before Cruz achieved glory in the UFC, capturing the bantamweight championship twice.

“I come from Tucson, Arizona, which is 70 percent Hispanic,” Cruz said. “It’s in me, that pride of being Hispanic. I feel it. In the way that the Mexicans always fought, they’re just tough and stubborn. I feel that’s in my bloodline and I’m proud of that.” 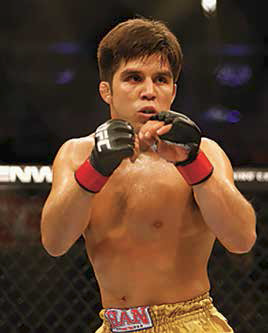 The youngest of six children, the Olympian Henry Cejudo was introduced to the sport of wrestling by his older brothers. “I loved that wrestling was all about one-on-one combat,” he said. “I was always too small to play football, too short to play basketball, but when I saw that wrestling had weight classes, I knew I was home and I fell in love with it from the start.”

Cejudo was an amateur superstar, winning four state wrestling championships. After winning gold at the Pan American Games in 2008, he set his sights firmly on Olympic glory, winning Gold at the 2008 Beijing Games. He retired from the sport in 2012 to compete in mixed martial arts. His pedigree and his impressive skills caught the attention of the UFC. Settling in as a flyweight, Cejudo has amassed a 10-1 record and is now one of the coaches on the upcoming season of “The Ultimate Fighter.”

“I want to become the best in the world,” he said. “What else is there to do in sports, but to want to be the best?”

“El Chapo” Judge is Assassinated Outside his Home in Mexico
Trump Winning(?) with ‘Latinas CONTRA Trump’
Translate »
%d bloggers like this: