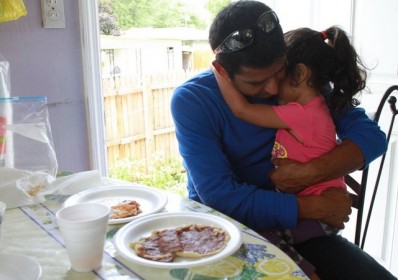 Luis Fuentes (L.) holds daughter, Janie. Fuentes is on an self-fueled investigation to find his wife.

For the last two years, the only thing Luis Fuentes has of his wife is the remembrance of her voice since her sudden disappearance when she was trying to cross the border into Texas. In those two years since her disappearance, Fuentes refuses to give up on his continuing quest which has led him to El Salvador, Mexico, and several other cities within the U.S. in order to find what happened to find his wife, Marilú Noeli Alas Santos.

“A day before Mother’s Day, I dreamed of her; I almost felt her,” said Fuentes, describing how he keeps his wife’s memory present with him.

The mother of his two children, Fuentes keeps all the clothes and jewelry which belongs to his wife within her bedroom in Brentwood, Long Island still awaiting her return.

“In my heart, there is always hope that she is alive, waiting for me to find her.”

Emigrating from Ahuachapán, El Salvador in the late 90s, Fuentes was able to find work as a construction worker and was able to stay in the country through the Temporary Protection Status (TPS) program.

A program that gave temporary immigration status granted to eligible immigrants who are not required to leave the U.S. but may find obtainable work authorization for any extensions of the designation, Fuentes was eligible due to the outcome of Hurricane Mitch which Congress in 1990 granted to aid victims of the hurricane which were largely in Central America.

In 2006, Fuentes would meet Marilú when she emigrated to Brentwood and rented a room from Fuentes in his house. Since both came from the same area in El Salvador, the two fell in love and would eventually welcome their first child, a son named Luis, in 2007. Later, the couple will have a daughter named, Janie. Both children are now aged 7 and 4.

When Marilú’s father became ill in 2011, she decided to return to El Salvador taking her two children in order to care for her father. However, Marilú would decide to return to the Brentwood a year later by crossing the border amidst the rising drug-related violence currently seeping along it. Fearing her travel plans, Fuentes begged her not to take that route.

“I begged her not to do it; I warned her that it was very dangerous,” said Fuentes, and sadly he was right.

Although Fuentes was worried that Marilú would not make it across the border, a phone call from Marilú to Fuentes from Texas gave him some hope she would be safe considering her 2,000 trek from El Salvador was over.

However, the phone call that was once a blessing would be a haunting reminder since it was Marilú last one before her disappearance.

According to Fuentes, his wife told him that she and her sister, Reina Carolina, were now on U.S. soil after having successfully crossed border at the Rio Grande. The two were now located in Hidalgo, Texas, but despite crossing the border they were both worried.

“She said that she was nervous because the coyotes had blackmailed them during the trip. She told me that I had to pay for the crossing immediately, or I would never see her again,” Fuentes remembered.

Taking his wife’s warning serious, Fuentes arranged a transaction that would wire $2,500 to a man who identified himself as Mario through Western Union. Despite ensuring this Mario would be paid, Fuentes never heard from Marilú again.

“Reina said that a car was supposed to take them to Houston, but Marilú was forced out of the car. They took her sister; it was the last time she saw her,” said Fuentes.

According to what his sister-in-law told him, Fuentes described how that after being separated from her sister Reina slept with other migrants in an unidentified place for a few days. After that she was then given to another coyote who took her to a motel named Palacio Inn. The motel was located in Alamo—the southern part of Texas—where she endured two days of torture being raped by her captors until she was able to escape.

“They called me several times asking for money in exchange for Reina. They said they also had Marilú, but they would not put her on the phone,” said Fuentes.

After escaping her captors, Fuentes’s sister-in-law was able to cooperate with immigration authorities who eventually arrested her kidnappers. However, the men who held Reina captive said that they did not know where Marilú was. After her ordeal, Reina—who lived in Brentwood as well—is waiting a U visa that is granted to victims of violence, human trafficking, and other heinous crimes.

Sadly, the case on Marilú disappearance is still open.

After Marilú’s disappearance, in November 2012 Fuentes was able to bring his children home from El Salvador. After securing his children’s safety with his family, Fuentes continued his search for his wife.

Traveling from door-to-door, Fuentes has appeared on the doorsteps of police departments, politicians, and diplomats in his country of origin, Mexico, and the U.S. trying to find his wife.

“In these past two years, I have sent out over 600 emails to people I thought could help me…I posted Marilú’s picture in 2,500 churches along the Mexico-U.S. border. I will not rest until I find her,” said Fuentes, expressing his resilience to find his wife.

While hopeful his wife is still alive somewhere out there, Fuentes has also made treks into the darker outcome of his search. Offering samples of Marilú’s DNA to anthropologists who are at work trying to identify the bodies of an estimated 162 migrants who have been found left in common graves at a cemetery.

Located in the southern Texas village of Falfurrias, Fuentes has provided Marilú’s DNA in an effort to cover all tracks. Doing so is not merely for own well-being but for his own children who he describes as it being the hardest for.

“Alive or dead, we want her back. We need a grave to cry over and to bring flowers.”

Until she is found or until there is any information regarding Marilú, we can expect Fuentes to continue his search no matter the cost until he finds out something about his wife and the mother of his children.