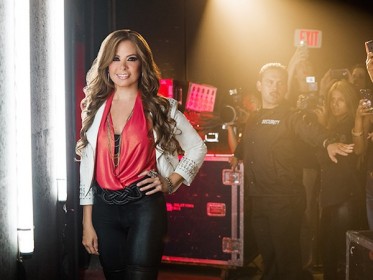 During a brotherly visit to my beloved sister’s place over the weekend I learned through her and her DVR that my sister’s idol, Gloria Trevi has a really show on Mun2, a 13-episode docu-series that premiered on Sunday. It’s geniusly named, “A Toda Gloria” which followers the Mexican pop star while on tour to promote her latest album with a birds eye view of her behind-the-scenes to the show’s creation with all the drama that comes with it, as well has her relaxed home life with her husband and children.

In an interview with Variety Trevi said, “It never occurred to me to have a reality series, given all the attention I get.”

Honestly, why didn’t someone think of giving her a reality show years ago? I mean this is the woman who’s sold out concert arenas and topped the pop charts for decades, became a fugitive from the law who then served almost five years in prison in Brazil and Mexico even giving birth to her son while behind bars! That in itself would have made for really good television!

Gloria Trevi is a Mexican Pop/Rock goddess, an icon and let’s not kid ourselves, the gays adore her and you know once the gays do, she’s doing something right!

To give an idea of the Gloria Trevi trajectory, she has published over 400 songs, sold over 20 million records, surpassed 100 million video views online, and sold out concert venues around the world.

After living between Monterrey, Mexico and Miami the singer recently decided to set up residency in Texas to avoid the constant glare of paparazzi. However, when Mun2 reached out and informed Trevi that 80% of the respondents to a survey said they wanted to see a show about her, she agreed to do it!

Trevi told Variety, “I feel that making a reality show is giving my fans the keys to my home, my life and is a way of sharing my dreams and frustrations with them, I’ll just have to forget the cameras are there.”

It seems Mun2 aims to accentuate the positive with “A Toda Gloria” but there’s no doubt that the channel hopes Trevi’s notoriety will translate to ratings. “This will show Trevi as a mother, a wife and an empowered woman,“ Mun2 Ruben Mendiola, told Variety, “it will give Trevi a chance to tell her own story as an artist.”

“A Toda Gloria” is in the tradition of Mun2’s successful string of celebrity reality series, starting with “I Love Jenni,” which centered on Mexican American pop icon Jenni Rivera, who died in a plane crash in late 2012 while the show was still in production.

Judging by the advance buzz on “A Toda Gloria,” Mun2 is expecting glorious results.