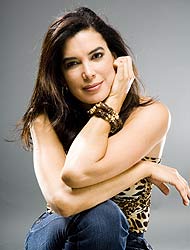 She once promoted a line of swim suits. Rodríguez is now promoting her own line of cosmetics. She has opened five stores: two in Caracas, one in Valencia, one in Ciudad Guayana and one in Bogotá  known as “Ruddy Rodríguez Cosmetics”. More stores are planned for Venezuela, Colombia, Ecuador and Miami.