CANTIFLAS, THE MOVIE: AN EMOTIONAL FILM THAT OPENS NATIONWIDE ON AUGUST 29

CANTIFLAS, THE MOVIE: AN EMOTIONAL FILM THAT OPENS NATIONWIDE ON AUGUST 29 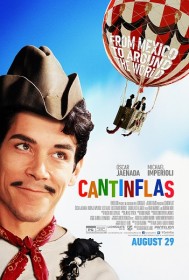 The life and career of the greatest icon of Mexican cinema and one of the best comedians of all time, Mario Moreno Cantinflas opens with fanfare on Friday, August 29 in theaters across the United States and Mexico.

With a masterful interpretation by Spanish actor Oscar Jaenada as Cantinflas, this film is a tribute to the legacy and successful career of Mario Moreno, from its humble beginnings as a street fighter and artist tents to becoming a Hollywood star. The comedian was the best paid in the world and received the Golden Globe award for Best Actor in 1957.

The production directed by Sebastian Del Amo and presented in association with Lionsgate, Pantelion Films, Televisa Movies and Kenio Films at a cost of more than 3 million dollars promises to be a blockbuster especially in America where millions of Mexicans live. The film was made in Spanish with extensive dialogues in English to appeal to both markets.

The choice of Spanish actor Oscar Jaenada initially caused extensive controversy. Many condemned the directors for using an actor who was not Mexican born, but undoubtedly this talented actor with a long career in Hollywood along actors such as Johnny Depp and Penelope Cruz does an excellent impersonation of Cantinflas, the comedian and Mario Moreno, the man and human being.

Oscar perfectly mimics the gestures, accent, voice and Cantiflas’ peculiar style of walking. The famous child actor, Mario Moreno Ivanova cried when he saw scenes from the movie and listened to a voice identical to his father. 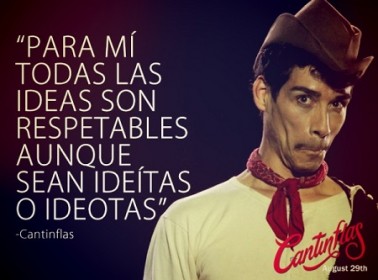 Jaenada confessed during the presentation of the film to the press, that was a long and laborious work; it was a process of months. He allowed Cantinflas to take over his body and his voice. The actor who ironically speaks Spanish with a strong regional Spaniard accent says “It is an honor and a stroke of luck that with the number of actors who sacrificed his life for this profession, this role was given to me.”

The purpose of a production of this magnitude is mostly to inspire the audience with the message that anything is possible even if you come from humble beginnings and of course to honor the glory of Mexican cinema. The film focuses on Cantiflas’ professional achievements and tenacity minimizing conflicting details and the great price the actor paid in his personal life due to fame.

The expectations for Cantiflas, the movie are many from a commercial and financial point of view as well as for the main actors; this could be the great consolidation of their careers. This is an emotional and fun movie that fans and followers of the old and new generations would be happy to witness once again his life of triumphs and successes, or as once the great Charles Chaplin described Cantiflas as “the best comedian in the world.”