Chocolate Egg Bidding Which May Become A New World Record

Chocolate Egg Bidding Which May Become A New World Record 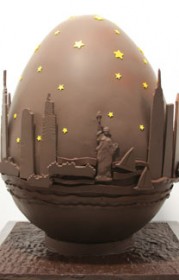 The arts field, such as dance, theatre, drawing, etc., is arguably one of the most challenging fields to get into because it takes creativity, some sort of skill and ambition to create something from just a few lines or a few pictures. Building sculptors can either be a hobby for some, but for others, it is a career. People get great joy out of creating something and see a vision live in 3D format.

Sculpting is a talent and could be one that is acquired. But artists like Hector Orellana and Andy Scott, are among the sculptors doing work on elephants and horses, respectively. Now chocolatier, Jacques Torres, has his own creation, a chocolate egg which stands 30 inches tall and weighs 100 pounds.

The egg is part of The Faberge Big Egg Hunt which is a “charitable event where more than 260 egg sculptures created by renowned artists have been hidden throughout the five boroughs.”

The egg will be on display in Dumbo until April 17th and be joined by the other eggs that are in the event until April 25th at Rockefeller Center.

All proceeds from the auction will benefit Elephant Family, an organization that protects Asian elephants, and Studio in a School, a nonprofit that brings arts programs to New York City schools.

Torres is trying to beat the world record for ‘The World’s Most Expensive Chocolate Egg Sold at Auction’. The record was set by William Curley at the Faberge Big Egg Hunt in London two years ago and the egg was sold for $11,000.