COSMOS LOOK TO SEND OFF RAUL AND SENNA WITH CHAMPIONSHIP

COSMOS LOOK TO SEND OFF RAUL AND SENNA WITH CHAMPIONSHIP 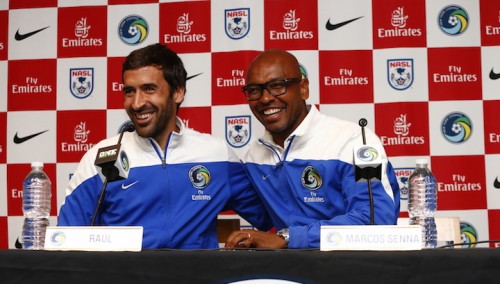 The New York Cosmos, who returned to soccer life three seasons ago with a NASL Championship, are looking to win their seventh one for soccer legends Raul and Marcos Senna tomorrow afternoon.

The semi-final will take place in MCU Park in Brooklyn, NY at 2pm. The Cosmos take on the Fort Lauderdale Strikers.

“I think these two players deserve for us to give whatever extra we can find,”

“They deserve to finish their careers as champions as they have been their entire lives.”

Senna, who was there when the Cosmos were reborn, led them to the championship in 2013. He was joined by his former teammate, Raul, 38, Real Madrid’s most prolific goal scorer in history, who sparked a rebound season for New York as they won the overall points title going into this postseason. Raul announced he would retire at season’s end. This has placed the Cosmos with a sense of urgency to do this now.

“This whole season, we have grown as a group,”

“We have the opportunity to be in the playoffs and win a championship with two legends of the game.”

The winner of Saturday afternoon’s match will gain a berth in Soccer Bowl 2015 and a shot at the NASL title, bringing to mind another legend, Pele, who came to give U.S. Soccer legitimacy, winning the title in his farewell season of 1977. Raul, for one has been impressed with the growth of soccer here in the United States.

“I always wanted to live in America and football in the U.S is growing quickly.”

These two old rivals from the NASL Glory years when they were the top professional league here should put on a show. The Cosmos won their only other game played here in Coney Island during the season.

3 Things We Can Learn From Dying Hospice Patients